After a spirit-filled weekend at Disciple Now, the congregation of Fairhaven Baptist Church will now be engulfed in music, song and worship during their revival Spirit Rise 2013.

The name of the event is definitely a reflection of what pastor Scott Stevens hopes will happen within this community and at his church.

“We hope everyone’s spirits will rise,” he said. 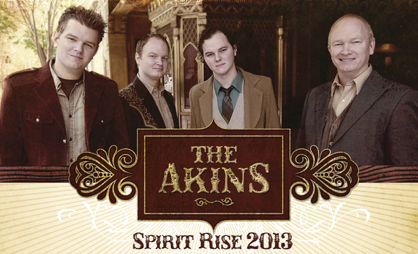 Fairhaven will hold the Spirit Rise 2013 revival event featuring The Akins family. The group is comprised of three brothers (Dave, Nick and Eli) and their dad (David) who are known for many Gospel songs including the well-known song, “I Want My Stage to be an Altar.”

The Spirit Rise event will feature a group Stevens said he has know for some time. The Akins will perform during the revival which is set to be held February 3-6 at 10:30 a.m. and 6 p.m. on Sunday and at 6 p.m. each weeknight.

“I knew them from Georgia and have watched their ministry flourish,” he said. “They perform all sorts of styles, it is really a family atmosphere.”

The hopes for the revival’s impact is to go beyond the four walls of Fairhaven and extend further than the church’s congregation.

“My desire for the Spirit Rise Concert is for the whole city to be uplifted this year,” he said.

The free event is open to the public and a love offering will be received during the revival. Additionally, a nursery will be provided to ensure that everyone will have a chance to come out and enjoy the event. The nursery is provided by Fairhaven and will be open for babies to kindergarten age. Stevens said he feels those children over kindergarten age will enjoy the music and time for worship.

The group is comprised of three brothers (Dave, Nick and Eli) and their dad (David) who are known for many Gospel songs including the well-known song, “I Want My Stage to be an Altar.”

A performance of this song is filled with live music and a message of the group’s stage to an altar for God to receive all the Glory including lines such as, “I want my stage to be an altar/

So all the praise goes to the Father.”

Stevens said he feels this will be a chance for people in the community to enjoy a time of worship.

“I want our town to know that if God be for us, who can be against us?” he said. “This will be a chance to worship freely and know that God is for us because I am a firm believer that wherever God is, nothing is impossible.”