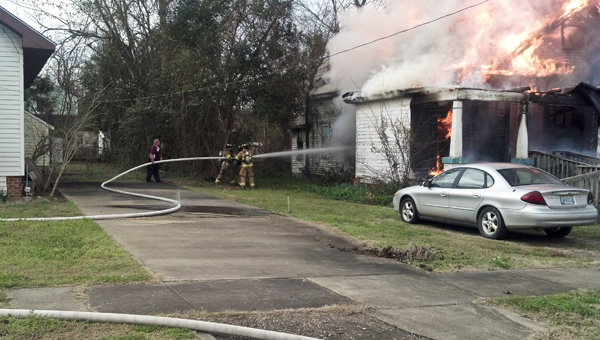 A Monday morning house fire in Demopolis claimed the life of one man and left another homeless.

According to authorities, Robert “Robin” Clifton was unable to escape the fire. His uncle Ed Finely was also in the house when the fire started but was able to get out with only minor injuries.

Demopolis Fire Chief Tommy Tate said the cause of the fire is undetermined as of Monday afternoon. The fire started in a middle bedroom. The house is located at 609 West Pettus Street.

Tate said it took the department about 45 minutes to fight the fire and they were on the scene until about 1 p.m. The department has already contacted Red Cross in hopes of getting Finley some assistance, who owns the house.

There was also a dog at the residence when the fire erupted. Tate said the dog escaped but had some marks on him from the fire.

“The guys did a great job fighting the fire,” Tate said.

The Alabama State Fire Marshal arrived on the scene about 10:45 a.m. to work alongside the local departments in determining the cause of the fire.

The house appeared to be an older wooden home, equipped with a wheelchair ramp in front.

Eatmon said he’s known the family for most of his life. He said this was the first fatality from a house fire that he has worked in 16 years as coroner.

Williams of First Baptist Church also was familiar with the family affected by the tragic events.

“Robin was a member of our church, he had some trouble walking,” he said. “Some Sundays our bus ministry would go and pick him up.”

Williams said he got a call this morning from a church member that saw the smoke from the direction of town where the house was located.

“I may have been in the office ten minutes before I was headed out of the door,” he said.

Williams said his church is going to offer support to the family. He added if there were more specific needs of the family he would be sure to let people know how they could help.

“It just shows us life is a fleeting moment, and we just never know,” Williams said.

A memorial service for Clifton will be held Wednesday, Feb. 6 at 11 a.m. at First Baptist Church of Demopolis. The family will receiver friends one hour prior to the service at the church.