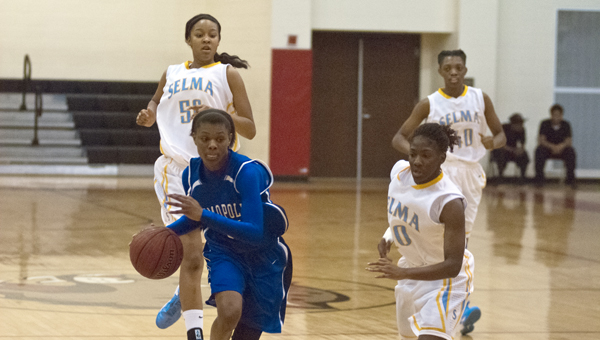 Demopolis senior Jonniece Collins runs past a Selma defender in Thursday night's loss to the Saints.

The Demopolis Lady Tigers opened the area tournament on Thursday night against the Selma Saints, and came up short, 34-30. The loss ends the Lady Tigers’ season with a record of 17-7 overall.

Head coach Tony Pittman said he was proud of the way his team played Thursday night, as well as all season long.

“My hat’s off to the young players on this team,” he said. “For them to come into a game like this and play as well as they did, that says a lot. I’m very proud of the seniors on the team, too. They played with a lot of freshmen this year, and to have a successful season like we did, it says a lot about their leadership.”

In the first quarter, Demopolis jumped out to an early 6-2 lead on the Saints, but Selma closed the quarter on a 10-1 run to give them a 12-7 lead after the first. Shartisha Tripp had all seven points for Demopolis in the quarter.

In the second quarter, Selma scored early, but Demopolis closed the quarter on an 8-1 run, closing the gap to one point. The Lady Tigers trailed 16-15 at halftime.

The third quarter didn’t see much more scoring than the other quarters, and Selma took a 23-20 lead into the final quarter.

The fourth quarter was the highest scoring quarter for Demopolis, but it still wasn’t enough. The Lady Tigers fought to stay in the game, but they could not close the gap in crunch time.

Free throws were the story of the night for Demopolis, as they only went 9-for-25 at the charity stripe.

“You can’t go to the line and not come away with something,” Pittman said.

He also said his team executed the gameplan, and limited Selma’s points in the paint, but the free throw line was the deciding factor.

All three seniors on the team put points on the board Thursday night. Jonniece Collins led the team with 9 points, Alexis Jones had 4 and Martina Smith had 3.

Tripp was second on the team in scoring in the game with 8 points, while Ivory Moore had 4 points and Caleb Washington had 2.

The Demopolis boys will play Friday night against the Greenville Tigers at Sumter Central High School.