The Bryan W. Whitfield Memorial Hospital Auxiliary kicked off the New Year by recognizing six of their members with awards for hours of service earned during the past quarter.

Carolyn Bell, a member of the Auxiliary since June 14, 2012, received a patch for 50 hours of service. During her first year she chaired the group’s very successful Love Lights campaign.

The youngest member of the group, VolunTEEN Lauren Osburn, of Linden, received a patch for 50 hours of service. The Marengo Academy student joined the group on Sept. 13, 2012, and works in the hospital’s gift shop and other areas.

A 1,500 hour bar went to both Charlotte Criswell and Kathy Patterson. Criswell, who joined the Auxiliary on March 8, 2007, has received a President’s Volunteer Service Bronze Award three times and the Silver Award for the past two years. 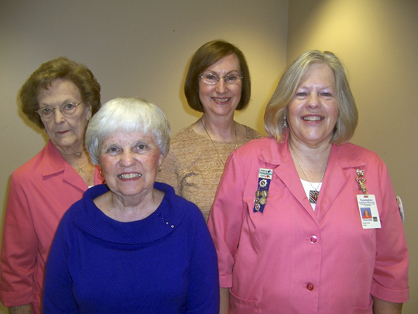 Patterson, who has been a member since Jan. 11, 2007, served as secretary of the group during the 2007-2008 year. She has received the President’s Volunteer Service Bronze Award three times and the Silver Award twice. In 2012 she received the organization’s highest honor when she was chosen as the Volunteer of the Year.

Agnes William, a member since March 9, 1995, received a 3,000 hour bar during the meeting. In 2009, she received a President’s Volunteer Service Bronze Award and has received the Silver Award in 2010 and 2011 in recognition of her hours of service. During her tenure as an auxilian, she has served two terms as treasurer of the group.

Receiving a 3,500 hour bar for hours of service was Brenda Parr. Parr joined the group on November 9, 2000, and has received the President’s Volunteer Service Bronze Award once, the Silver Award five times and the Gold Award in 2008. She has served one term as secretary of the group and four terms as their president. She was chosen as the group’s Volunteer of the Year in both 2002 and 2009.