While most children may fight their brother or sister or at worst the flu, young Reagan Michele Hatcher had a much bigger fight ahead of her when she was born with a Congential Heart Defect (CHD).

Though the Hatchers currently live in Tennessee, they are no strangers to West Alabama. Melanie Soronen of Demopolis said she is proud to call Reagan’s father, Bobby, her other half, as they are twins.

After Reagan’s diagnosis, Bobby and his wife Rhonda Hatcher began a journey with their daughter that included many hospital visits and surgeries.

In fact, at only 5 days old, baby Reagan battled the first of many heart surgeries. In addition, there was the need for feeding tubes and oxygen tubes at a very young age.

CHD are defects that cause problems with the heart’s structure and are present at birth. The defects change the normal flow of blood through the heart, according to information from the National Heart, Lung and Blood Institute.

After overcoming many of her initial obstacles, Reagan worked to begin walking and talking when she was ready, her mother Rhonda Hatcher said. “She showed us all that nothing was going to stop her,” she said.

Reagan did anything her siblings did and worked very hard at what she wanted to accomplish. Reagan’s siblings include Robby, 10; Rileigh, 9; and Ryan, 2.

After all Reagan’s body had been through, she went into kidney failure back around Thanksgiving and was placed on dialysis. She came off dialysis the Sunday before her last surgery on Jan. 10 of this year.

“This surgery was an all day event that turned out to be our worst nightmare. She was able to come off the OR (operating room) bypass but due to the stress her body had been through, she arrested again and was given CPR and placed on ECMO (heart/lung support). This was the third time in the last seven months that she had to be placed on ECMO,” her mom said.

This time Reagan just couldn’t come off of ECMO, her young body was tired.

“‘We tried everything we could and she has fought a good battle. I’m sorry to say that the course has lead to this but we can’t do anything else for her.’” Hatcher recalled these words from the doctor on a day she said she would never forget. She said she knew God had already prepared her as she didn’t sleep much that night prior.

Rhonda said she wrote her “see you later” letter to Reagan. A letter letting Reagan know that though, she would be leaving Earth, she felt they would meet again in heaven.

Family was called in on Jan. 16, which happened to be one of Reagan’s sibling’s birthday. They spent the day holding Reagan and sharing her favorite book “I Love you More than Rainbows.”

It was on this day, Rhonda was able to read to her daughter a letter no mother, likely, dreams of ever having to write. The next day, Jan. 17, is a day Soronen said, ‘Heaven gained a beautiful angel,’ when Reagan passed away at age 5.

After seven heart surgeries, two stomach surgeries, many heart caths and receiving a trach, Reagan’s body was laid to rest in Cuba.

For Aunt Melanie, a sense of peace for her came from the ‘prayer warriors,’ that gave her comfort from her Facebook updates about Reagan.

“It started at first with just asking for prayers from friends and from there, it just exploded. It went from just friends to friends of friends and church groups,” she said. “I saw one post from someone praying for Reagan all the way in Afghanistan.”

In addition to a prayer blanket sent to Reagan from the “Hooked on Prayer” group at First Presbyterian Church, Melanie saw support coming from many directions.

“I want to thank my church family, Fairhaven Baptist Church, for their love and support. They have been praying for Reagan since she was born. Also, I want to praise the three sets of grandparents who took turns going to Tenn. to stay with the kids while Bobby worked,” Melanie said. “Thank you to Demopolis for your outpouring love and support for Reagan and our family. I have people that I don’t even know tell me that they were touched by Reagan’s journey and are continuing to pray for our family.”

She said there were those praying for her family and then those that donated by purchasing a ‘Reagan’s Heart of Hope’ T-Shirt. There was about $4,400 collected from donations and T-Shirt sales.

Rhonda designed the shirts that feature the text, ‘Reagan’s Heart of Hope’ around a heart and also bears the scripture Isaiah 40:31.

“We know God has a purpose for all of this,” Soronen said. “I am just in awe of Rhonda because of the impact she has had on so many people. She is not only my sister in-law, she is my sister in Christ.”

Just weeks later and also during CHD awareness week, Rhonda said she cannot write into words the effects this journey had on her family.

“She lived such a courageous life and though we didn’t want her journey to end this way, her journey ended but not her life. We wanted her home with us and this is hard and no parent should ever have to go through anything like this – all children should be healthy and happy. I know now she is healthy and she is swinging on heaven’s swingset,” she said.

Locally, Melanie has already begun to ensure Reagan’s testimony will live on. When she is not wearing her ‘Reagan’s Heart of Hope’ T-Shirt, she is working hard to spread awareness about CHD. Recently, Mayor Mike Grayson signed a proclamation for CHD awareness. 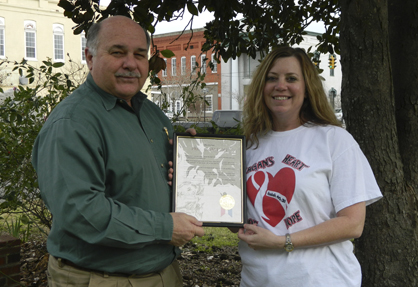 Mayor Mike Grayson recently signed a proclamation for Congential Heart Defect awareness. He is shown with Melanie Soronen. Her niece Reagan Hatcher was born with CHD.

“I want Rea Rea to look down on her Aunt Mel and know that I am continuing her spiritual journey by telling her testimony and helping bring awareness to CHD. This situation has made me spiritually stronger and more determined to do God’s will. It gives me peace to know that I will see her again one day, we all will.”