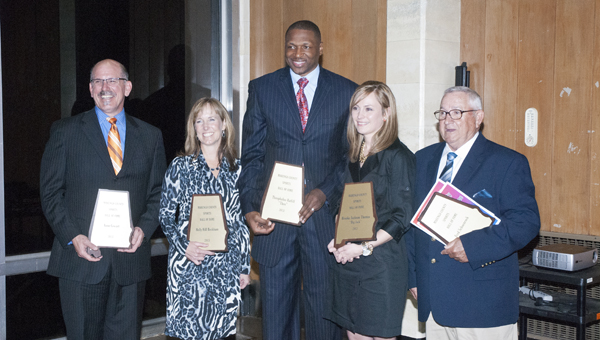 Holly Hill Beckham, who played tennis at Demopolis High and Mississippi State, was the second female inductee into the Hall. She was the Alabama High School state singles tennis champion in 1984-86, and earned the state doubles championship twice. By the time she graduated DHS, her high school tennis record was 46-1. During her time at Mississippi State, the Bulldogs were ranked in the top 25 three of her four years there.

“I want thank all of my coaches and teachers for their support throughout my playing career and through life,” Beckham said. “This is a great honor and privilege.”

Yann Cowart, who played football, baseball and basketball at Marengo Academy, walked on at Auburn and started all four years there. His teams won high school championships in 1980 and 1981. At Auburn, he played in four bowl games and was captain of the 1986 Sugar Bowl team. Coward majored in architecture and is now the vice president of Infinity Architecture.

“I want to thank my family and my teammates,” Cowart said. “This is as much yours as it is mine. Growing up in this area set us up for success because we always had to work hard.”

Theophalus “Theo” Ratliff played basketball at Demopolis High School before going on to play at the University of Wyoming and later in the NBA. Ratliff was the leading shot blocker in the NCAA when he graduated from Wyoming. He was drafted in the first round of the 1995 NBA draft by the Detroit Pistons. He had a 16-year NBA career playing for nine teams. He finished his career with 5,809 points, 4,596 rebounds and 1,968 blocks. He is ranked 18th all time in career blocks.

“I love this city and the kids here,” Ratliff said. “I’m extremely honored to be inducted. I want to thank my family for being my biggest fans all along and especially my mother, who has been my biggest influence. I’m going to continue to focus on giving back to this community.”

Fred Shoenrock coached football at Demopolis High School from 1974 to 1987. During his tenure, his teams went 109-48. In the region, his record at DHS was 58-9. Of his 14 years at the school, the team made the playoffs in nine of them.

“Nobody knew me when I came here, but I knew Demopolis,” Shoenrock said. “I grew up in Meridian, but I used to fish in Demopolis in high school. I took the job coaching here without a place to live, except for a fishing camp on the river. I want to thank all the football players, cheerleaders, the student body and the band from ’74 to ’87. Even though we never won a state championship, we were always competitive and we always gave 110 percent.”

Brooks Jackson “Big Jack” Thomas played football for the Linden Red Devils, and was selected All-Conference in 1965 and All-State in 1964 and 1965. He was strongly recruited by Alabama and Auburn, but decided to go to Mississippi State so he didn’t hurt any feelings in his family. He was drafted into the NFL by the St. Louis Cardinals. After the NFL, he moved to Copiah, Miss., where he coached at Copiah Academy for seven years.

“Thanks to the hall of fame for this honor,” she said. “I always enjoyed hearing stories growing up about growing up in Half Acre and playing football with his friends. I have to acknowledge my father’s faith and love for Jesus Christ. He always said the only reason he excelled in football was the Lord answering the prayers of his mother. Thank you for honoring my dad.”

In addition to the five inductees, the Marengo County Sports Hall of Fame also honored the 1978 Sweet Water football team, which won the state championship that year.

The Hall of Fame also gives out a scholarship to one senior student-athlete in the county, and this year, the $1,000 scholarship went to A.L. Johnson’s Demarcus Woods.