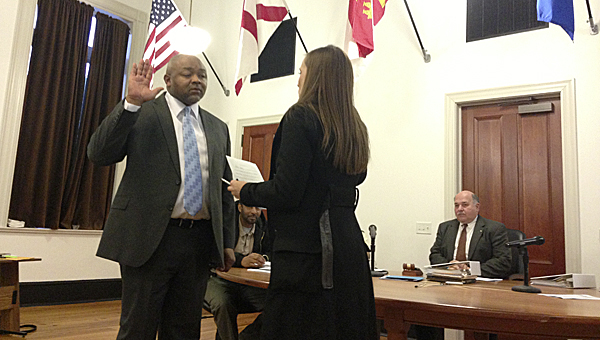 Nathan Hardy was sworn into his seat on the Demopolis City Council prior to Thursday night’s meeting.

Hardy was sworn in by Marengo County Probate Judge Laurie S. Hall. He replaces Mitchell Congress, who resigned in January because of health concerns.

During the meeting, the council voted to take bids on demolishing two abandoned homes that have been declared public nuisances. The homes are in the 800 block of Second Avenue and the 1800 block of A Street.

There was some discussion about the home on Second Avenue. City attorney Bill Poole said minister Grace Clayton-Motley had shown interest in restoring the home because it was the first owned by a black female in Demopolis.

Poole said the condition of the house has been discussed numerous times and no progress has been made on making improvements. He said there was a drug arrest there last month and neighbors have told him they wanted the house torn down.

“It has started to grow back up again,” Poole said. “Nothing has been done to improve the structure. The front door is wide open. The windows have been broken. It’s trashed inside.”

Poole said if he’s provided a plan to make improvements, he will furnish that to the council and the demolitions could be reconsidered.

“If the owners of either of these properties come forward with a plan, I’ll be glad to bring it back before the council,” Poole said.

The council also tabled discussion concerning raising rental rates at the Demopolis Civic Center. The rates have been the same since 1999.

The civic center was built in the 50s and issues with the heat, air conditioning, floors, windows and appliances are becoming more frequent, according to Public Works Director Mike Baker.

“It’s beginning to get to the point where we are having yearly problems that creep up on us,” Baker said.

Any increase in rental fees would be used to help offset those expenses. Since October, the civic center has brought in $9,800 but has cost between $15,000 and $16,000 in upkeep.

The rates discussed Thursday would increase the cost for social events like weddings and reunions to $500 from $250.

There would also be fees for set up and clean-up if needed.

No action was taken on the idea of increases. The issue is expected to come up again during the council’s first March meeting.

Mayor Mike Grayson and council members acknowledge that any increases would be a Band-Aid on renovations that will be needed some day.

“This is just a Band-Aid to stop the bleeding,” said Councilman Charles Jones Jr.

Grayson agreed: “At some point we are going to have to make some decisions about what we do.”

In other business, the council took the following actions:

•Appointed Arthur Evans to the park and recreation board to replace Joe Bailey, who resigned.

•Tabled making nominations for the board of adjustment.