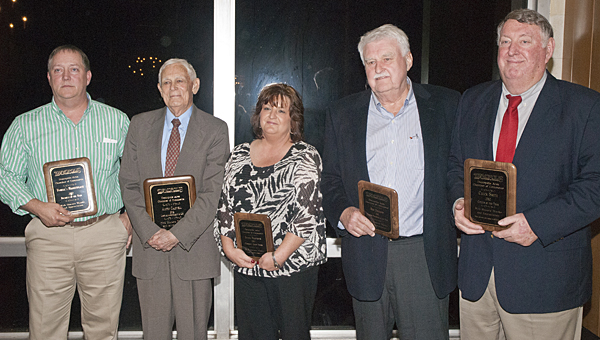 The Demopolis Area Chamber of Commerce Celebration was fun and also took care of some important business Monday night.

Hypnotist Steve Meade performed at the annual event much to the delight of those in attendance. Several awards were also given out.

Chuck Smith, director of human resources at RockTenn, was named the Citizen of the Year for 2012. This is the second year that Smith has earned the honor. The other year was 2002.

“I appreciate this award more than you’ll ever know,” Smith said after receiving the honor. “I appreciate the friendship of all the people in the room.”

“There are some great things coming,” Smith said.

Vowell’s Market Place was named the Business of the Year, while former Demopolis Mayor Austin Caldwell was given the Lifetime Achievement Award.

“I have not accomplished anything by myself. Demopolis in my opinion is the only place. I’ve been here since 1927, and I look forward to being here all next week,” Caldwell joked.

Ben Sherrod was named the Chamber Volunteer of the Year, while Deana Pritchett was given the Community Spirit Award.

Pritchett created Demopolis Cares to help kids and the elderly have a great Christmas and has done fundraisers to support troops as well.