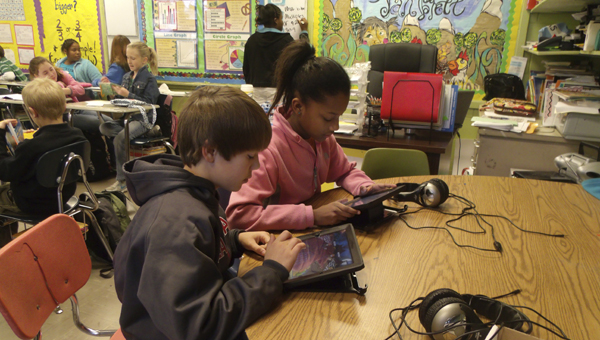 Recently, a room of board members filled the conference room of the Demopolis Board of Education to hear the story of a teacher that has received nearly $10,000 worth of classrooms grants from the Demopolis City Schools Foundation during her 19 years in the classroom.

Her message and objective was to simply say, “Thank you.”

Tracy Stewart, second grade teacher at Westside, recalled the first grant she wrote called, “Say Cheese.” The grant request was for $200 for a polaroid camera.

“I remember then I was ‘big time’,” she smiled and said. Now with the changes in technology many grant requests call for iPads, wireless headphones and many more innovative ideas by teachers to enhance the classroom experience.

Twenty years ago, the Demopolis City Schools Foundation was deemed a non-profit in July 1993. This year will be filled with 20th anniversary moments to commemorate and reflect on the success of the foundation.

The inception of the idea to begin fundraising efforts came late in 1992 when there was a $750,000 dollar shortfall as the building of the new high school on Highway 80 was about to take place.

Hugh Lloyd and Amy Webb were the chair and co-chairs respectively of the initially fundraising efforts. The community banded together to finance the shortfall, which would fund building of the school’s auditorium, funded basic furnishings, lighting for the baseball field among other things.

While $750,000 dollars would have sufficed to furnish the needs of the future home of Demopolis High School, Lloyd and Webb did not stop there.

Their goal was to raise an additional $100,000 that would go towards the beginning of a foundation that would fund classrooms items for teachers, in efforts to enhance the classroom experience.

In addition to the fundraising, Lloyd and foundation supporters then learned of seed funding that Alabama Power was making available for foundations across the state of Alabama. It appeared as though, the timing of the efforts were just right because the foundation hopefuls soon became recipients of the seed funding.

But, the fundraisers were not looking to rely solely on the seed funding they were looking for businesses in town and local donations to drive the project.

Robertson Bank was one of the first local businesses to dive into support of the foundation financially with a $100,000 pledge to be paid over 10 years made in January of 1993.

John Northcutt who was then president of Robertson Bank recalls the importance of the pledge being made to showcase the bank’s commitment to the foundation.

“It was our way to make a step forward in the community and set a good example of our commitment to the foundation,” he said.

This pledge came before the foundation was even deemed a non-profit later that year in July.

“It is important for the children in our system and to have a viable public school system is paramount for continued success,” he said.

Louise Reynolds, first executive director for the DCSF said she recalls the pledge being real exciting.

“I think the donation gave the foundation a real boost and made us believe this really could happen, it really showed they (the bank) had a vision for the foundation and for Demopolis,” she said.

After Reynolds served as executive director, Jan McDonald then embarked on her journey leading the foundation.

McDonald brought an interesting perspective to the foundation as she was transitioning from employment with The Demopolis Times and in turn, covered many of the foundations events.

“In covering the events leading to the start of the foundation, I just thought ‘Wow, this will be so great for this community,’” she recalled.

After being hired as the new executive director in 1999, she began the first of her 13 years working at the foundation.

“I was thrilled to come on board at the foundation,” she said.

McDonald said she recalled beginning her time at the foundation and attending a two-day program for training.

She said she was very excited to go learn more about what other foundations were doing around the state and in turn, learned the foundation in Demopolis was developing a name of its own with its many successes.

SchoolFest, selling Boston Butts and other events continued to make a name in the community as annual activities of the foundation.

“The teachers did a great job of getting the people excited about the event and making it happen,” she recalls about SchoolFest.

From that donation and enormous community support, the foundation has been able to fund a total of $900,000 in the last 20 years.

This year current executive director Amanda Barnes and some board members gave grant recipients a pleasant surprise on what they may have perceived to be such a typical school day.

“There were some teachers tear up,” Barnes said.

Innovative ideas have come from the teachers of Demopolis in efforts to grant their students enhanced learning opportunities.

U.S. Jones teacher Dana Hill serves as a premier example. It is not uncommon to find the students in Dana Hill’s classroom at U.S. Jones typing away on iPads made possible by the foundation’s grant program.

“One of our goals is to build a relationship with the schools to let them know we are here for them,” Barnes said

This year there were 37 grant applications with a grand total of $124,000 dollars requested. Although there only $50,000 of funds available, numerous grants were able to be granted with 21 recipients.

Coming from an initial grant fund total of $3,096 dollars in 1994, the foundation has seen significant growth throughout the years.

Then there were nine grant applications reviewed and seven were all or partially funded. The grant amount quickly climbed the next year in January of 1995 when 13 teachers applied for grants and the foundation was able to pour $10,000 into the classrooms filling 11 of the application requests.

“I think they are doing a great job in presenting the grants,” Reynolds said.

Reynolds recalled when the foundation was in its first years many of the grant request were for those simple classroom additions like dictionaries, books and other things.

As technology has evolved, so have the requests of the teachers of Demopolis City Schools.

The foundation operates with the assistance of a board comprised of the city’s business leaders. These board members help support projects, fundraisers and assist with oversight of the foundation’s operations.

“I enjoyed sharing the opportunity with people to do something good for Demopolis and the people of Demopolis were so receptive to helping Demopolis,” Reynolds said.

Some of the goals Barnes has for the foundation as they continue to move forward include securing a million dollars in the endowment fund, or the ‘hallelujah goal’ as Lloyd called it years ago, she said.

“I also want to continue to build awareness about the foundation and also be in a position to give out more grants,” she said.

Dan Wilson, owner of Colony Office Products, and his wife Vickie Wilson have been long-term supporters of the DCSF as their children have likely benefited from grants placed in classrooms.

“We have supported the school foundation from day one as our donations are going toward helping better educate the children of the community,” Dan said. “This is an excellent way we can give back to the community and as long as we are blessed, we plan to pass it on.”

The longevity of the school foundation is wrapped up in the endowment fund and the continued support of community individuals with a vested interest in the school system.

With a growing endowment and continued community support, the DCSF is well set to continue providing classroom grants to teachers in Demopolis City Schools.

It also is on track to hold true words said by Hugh Lloyd in a newspaper interview in August of 1993. “This will be a permanent foundation,” he said. “It will never die.”

This story was part of Profile 2013: Then & Now, which is available in newspaper racks through Friday or at The Demopolis Times office.