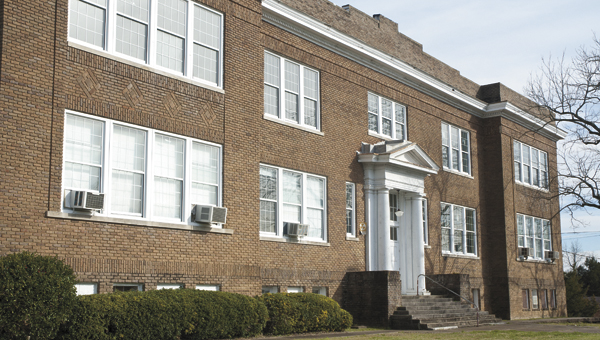 The Old School on Main turns 100 years old this year. The building was built in 1913 and served as a school through 1981.

The Old School on Main Avenue is as much of a fixture in Demopolis in 2013 as any other building in the city.

The building that currently stands at 609 South Main turns 100 years old this year. Built in 1913, it was home to thousands of students who grew up in Demopolis for 68 years, until it closed its doors as a school in 1981.

Before the school was constructed in 1913, another building stood in its place. Marengo Military Academy was built there in 1889, but the academy disbanded in 1902. That building then became home to the newly organized Demopolis Public School.

That building burned down in 1913, and the city quickly erected the building that currently stands.

An architect from Montgomery, Frank Lockwood, was chosen to rebuild the school. Lockwood’s work can be seen in other buildings in Demopolis, as well as across Alabama on college campuses, in churches, hospitals and residences. Here in Demopolis, he designed the home at 301 South Walnut, which is called Lockwood, as well as the home at 404 Capitol St. There were other Lockwood homes in Demopolis that are no longer standing.

From 1913 to 1937, this was the only public school in the white community of Demopolis. That year, a high school was built and the school on Main Avenue became a grammar school. Then, with integration, it became the city’s junior high school until it closed as a school in 1981.

In 1983, the former school was listed on the National Registry of Historical Places.

The building is now home to the Canebrake Players, who restored the auditorium for theatrical productions.

It is also used by the Girl Scouts, the Demopolis Singers and the Two Rivers Arts Council.

Kirk Brooker, of the Marengo County Historical Society, said he feels that the building brings a lot to the city.

“It is a great place for the arts,” he said. “Everybody that uses it loves it.”

He added that he hopes the city will apply for some grants to turn it into an arts and cultural center as well.

Jennifer Roemen, of the Canebrake Players, said the building is one of her favorite places in Demopolis.

“I love this place,” she said. “If I had a million dollars, I’d renovate it and do everything with it that needs to be done. The old school is an incubator for every avenue of art. It feeds off of everything. It was built as a school, and now it’s used to educate on the arts.”

With every good things comes some issues, though. The building needs some work done to it, not just for aesthetic appeal, but for safety reasons as well.

“There’s some things that need to be done, and those that love the old school are aware of what needs to be done,” Brooker said. “The issue is getting the city to care. There are powers that be that listen, but don’t do. Every time it comes up, nothing gets done and it’s on to the next project. People are quick to say it’s beautiful and they love it, but they’re not quick to support it. You can’t yell too loud, though, because they will threaten to demolish it.”

Even with the issues, the Canebrake Players and other groups are able to utilize the building and keep the history alive.

This story was part of Profile 2013: Then & Now, which is unavailable in newspaper racks through Friday or at The Demopolis Times office.