Demopolis native Ray Williams made a name for himself at the Alabama Powerlifting State Championship on Saturday, Feb. 23 in Mobile.

In only his second powerlifting competition, Williams, who weighs 361 pounds, set a new U.S. record for the raw 275-pounds-plus division with an 860-pound squat. He also attempted 905, and got it, but a small jab step caused the judges to disallow it. 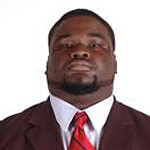 Williams said it felt good to set the record, but there’s still more to go.

He added that he intends to be better each time he steps on the platform.

Williams graduated from Demopolis High School in 2005, and was defensive tackle for the 2004 state championship football team. He said his experience on that team has helped him in weightlifting, and in life.

“That season helped instill the attitude that second place wasn’t good enough,” he said. “We went into that ’04 season after coming up short in the last two seasons, and we made it known we were going to win the championship, and it was up to everyone else who would finish second. We finished that season 15-0 and state champs.”

He went on to play football at Tennessee-Martin, where he said it was culture shock when he first walked in.

He now lives in Fulton, Miss., and is the defensive line coach and strength and conditioning coordinator for Itawamba Community College. He said he recently sent his registration for the USAPL Nationals in Orlando on July 19-21, which will be his next competition.

His mother, Shirley Williams, his aunt and his sister still live in Demopolis.

Below is a link to Williams’ lifts at the competition last weekend.