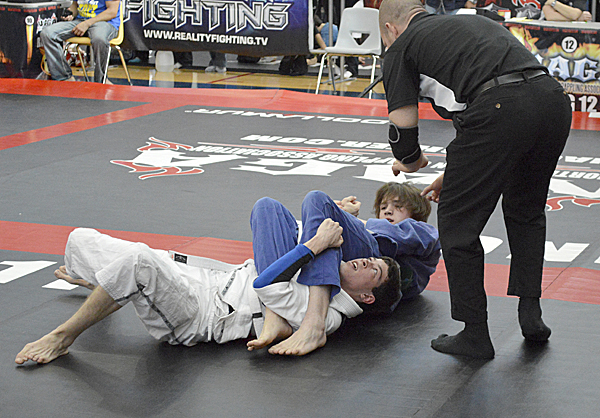 Jackson Morrison secures an armbar submission during his win in the beginner gi division at NAGA Atlanta.

Jay Russell, who owns Ross with his wife, Ronda, said the competition at this event was some of the toughest that the group had faced, but all 11 competitors from Ross that went brought home a medal.

“It was one of the biggest tournaments NAGA has ever had in Atlanta,” Russell said, “which is good, but more challenging. I’m very proud of how all of Ross’ members competed.”

Russell said that because it was such a big tournament, it was difficult to keep up with coaching throughout the day.

“Ronda and I were running around like crazy trying to coach,” he said. “The help of the parents that went with us was invaluable. They would keep us informed when someone was called to the mat or anything like that.”

Russell added that he wanted to thank Vowell’s, the Chu Clinic, the Fitzgerald Clinic, MedCenter, Southern Pipe and Supply, BankTrust, Holiday Cleaners and Batter Up Sports Bar and Grill for sponsoring them. 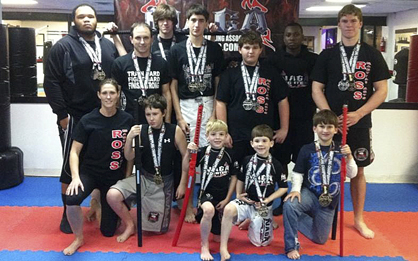 “It’s not cheap to get to these events,” he said. “It’s $100 to register, and you have to show up a day before to weigh in, so you have to get a hotel. Their help makes all of this possible.”

The results for Ross Martial Arts at the tournament were as follows:

• Jackson Morrison, first in 14-15 teens beginner gi and intermediate gi and second in no gi