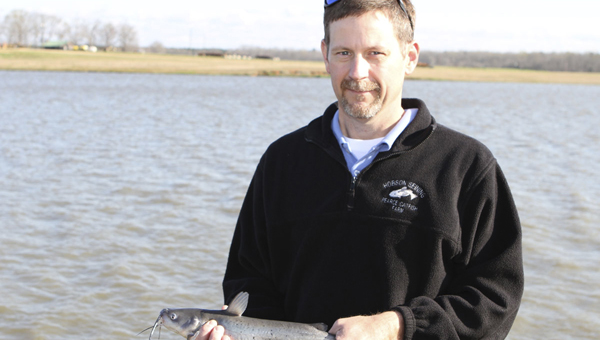 Derry Bone, Marion Junction native, was recently named the catfish farmer of the year by the Alabama Catfish Producers.

Although Derry Bone has submerged himself in the catfish industry, there’s nothing fishy about him.

For his hard work and dedication to the industry, the Alabama Catfish Producers, a division of the Alabama Farmers Federation, recently named Bone Alabama’s Catfish Farmer of the Year. Raised in Marion Junction, Bone has worked with David Pearce Catfish Farms in Dallas County for 18 years.

“I work for a great family and I hope I can represent the state well,” Bone said in a release.

Bone manages 121 ponds on 1,387 acres. In an average year, the farm raises anywhere from 13 to 14 million pounds of channel fish. As manager, Bone said he does a little bit of everything on the farm.

And although Bone spends much of his time on the farm, he will be spending most of next year speaking with restaurant owners and grocers about the importance of buying U.S. farm-raised catfish.

“I want them to know where their fish come from, and demand the best,” Bone said. “I think restaurant owners can do a better job making sure their employees know where the catfish they serve comes from and everything else on the menu too.”

And despite foreign competition and its recent effects on the U.S. catfish industry, Bone encouraged residents to continue to buy local because “First of all, you know what you’re getting with our fish and second, you’re helping your neighbors.”

As a part of his title of catfish farmer of the year, Bone traveled to the International Boston Seafood Show, the largest seafood show in America. He will also be featured in promotional ads for Catfish Farmers of America with the Mississippi and Arkansas catfish farmers of the year.

“Everyday is a different challenge,” Bone said. “Trying to work through it can be aggravating. The fish business is tough financially right now, but it will turn around.”