You’ve been ‘flocked’ by DECA 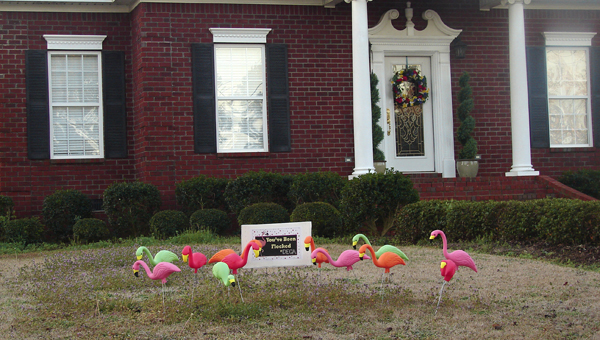 The Demopolis High School DECA club are ‘flocking’ local residents as a part of a fundraiser to raise money for their conference to Anaheim, Calif.

Tuesday morning two local residents woke up to a pleasant surprise in their yards courtesy of the Demopolis High School DECA club.

Though at first, it may have seemed mysterious for flamingo statuettes to land in their front yards overnight, they later found out they have been ‘flocked’ by the DECA club as a part of their fundraiser.

Barbara Hill and Paula Parr were among the first two to start the ‘flocking’ process. The club chose the two residents and ‘flocked’ their yard without them knowing Monday evening.

“This is a fun project for the club,” Connie Davis, DECA advisor said. “We anticipate it lasting about two weeks.”

Hill and Parr began the process and from there, they are able to choose a friend to be ‘flocked’ next. The flamingos sit in the yard of the homeowner for a day with a sign that reads, “You’ve been flocked by DECA.” From there, the resident is suggested to make a donation for the flamingos to mysteriously appear in their friend’s yard the next morning. 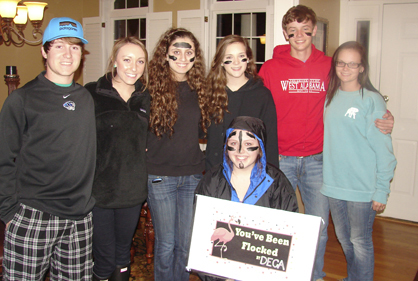 Davis said the fundraiser is to send the students to their International Development Conference in Anaheim, Calif. this April.

Davis said she wanted people in the community to know the flocks are in and wanted people to be aware of the fundraiser, because they never know, they could be next to be flocked.

For those that find the flock in their yard, a letter stating the following will be attached:

You’ve been flocked by DECA!
Don’t Despair…
This is a fundraiser by Demopolis High School DECA.
A friend of yours paid us to place these colorful darlings in your yard. This flocking is done in good spirits and is not meant to be mean. These flamingos will roost on your lawn until this evening when they will mysteriously migrate to another friend’s (victim’s) lawn.
Let us know where you would like the flock to go next and please make a donation! Keep in mind it needs to be someone who will find it as humorous as you. If you choose not to participate, we understand. Please don’t hurt our colorful feathered friends! Again, thank you for your sense of humor and your support.
All proceeds will go to DECA’s trip to Anaheim, California, April 23rd – 27th to attend the International Development Conference where 18 of our students will be competing.
Contact Name: Connie Davis, 289-0294 ext 23
Name of Friend “Victim” to be Flocked:
Friend’s Physical Address:
Do you want your friend to know it was you who ordered the flamingo flocking? Your Name:
Your Phone:
Thank You For Your Support!