Lady Tigers battle back to win in nine innings 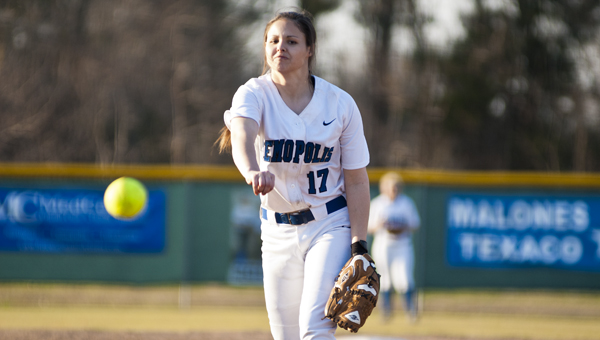 Demopolis senior Danielle Tatum came into the game in the fourth inning and struck out ten batters on her way to a win. The Lady Tigers won 8-7 in nine innings.

The Demopolis Lady Tiger softball team overcame a deficit three different times in Thursday night’s game against Hale County to come away with an 8-7 win in nine innings.

The Wildcats jumped out to a 1-0 lead in the first and added two more runs in the second to take an early 3-0 lead. The Lady Tigers got two runs back in the third on a two-RBI double from Sydney Colyar that scored Victoria Washburn and Danielle Tatum.

Tatum came in to relieve Zoe Lewis in the top of the fourth and struck out 10 of the first 13 batters she faced.

The Lady Tiger offense tied the game in the bottom half of the fourth on a grounder by Olivia Brame that scored Courtney Lawrence.

The game stayed tied at 3-3 until the eighth inning, when Hale County plated one to go up 4-3 and put the pressure on Demopolis to keep the game going.

Riley King led off the bottom of the eighth with a double, and she advanced to third on a groundout by Lawrence. Jade Montgomery singled to bring King home and tie the game at 4-4. Demopolis was unable to bring Montgomery around, and the game continued to the ninth inning.

In the ninth, the umpires put the international tiebreaker rule into effect, meaning the batter who made the final out in the previous inning starts the inning as a runner on second base.

Hale County took full advantage of this, and led off the inning with an RBI-double. The next two batters for the Wildcats singled and brought in a run, giving them a 7-4 lead going into the bottom of the ninth.

The next batter, Alexis Jones, roped a liner into the right field corner and legged out a triple, bringing in both runners on base and tying the game at 7-7. King came to bat after Cameron Thomason struck out, and got on first after the Hale County catcher failed to make the catch on a popup.

This brought Lawrence to the plate, and Demopolis put on the squeeze play. Lawrence made a perfect bunt in between the pitcher and first baseman that scored Jones to win the game for Demopolis, 8-7.

“It doesn’t get better than that,” head coach Joey Browder said. “This was a total team effort, and a big win for the team. Hale County is a really good softball team. This is a big step forward for us; we’ve just got to be mature enough to learn from the mistakes we made in this game and move forward.”