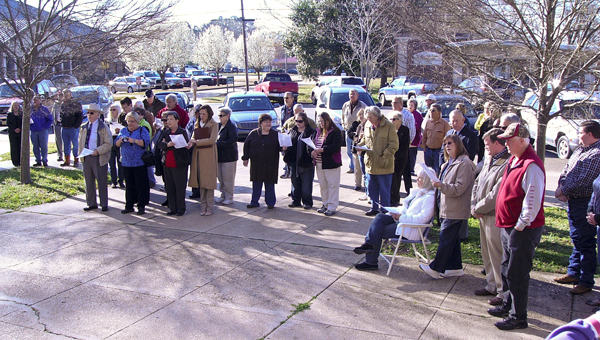 A large crowd gathered outside the Marengo County Courthouse on Tuesday morning to pray during the Praying Across Alabama program.

A group of about 100 people gathered on the steps of the Marengo County Courthouse on Tuesday morning, not to protest, but to pray.

Praying Across Alabama, a ministry started by the Alabama Baptist Convention, is on a tour of the state of Alabama, stopping at all 75 courthouses across the state to pray with the people.

Pastors from different churches in Marengo County and other people from the community spoke to the crowd Tuesday morning and prayed with them.

Dr. Bobby Hopper, director of missions for the Bethel Baptist Association, kicked off the event with a prayer, and introduced the first guest, Dr. Randy Creel, pastor of Linden Baptist Church.

Creel read from Psalm 86, which is a prayer of David. The Rev. Warren Huggins from Providence Baptist Church followed Creel, and read from Luke 18.

Midway through the program, Judge Wade Drinkard said a prayer for the people of Marengo County and the state of Alabama.

The Rev. Ed Shirley from Linden United Methodist Church then led the crowd in song with his guitar. 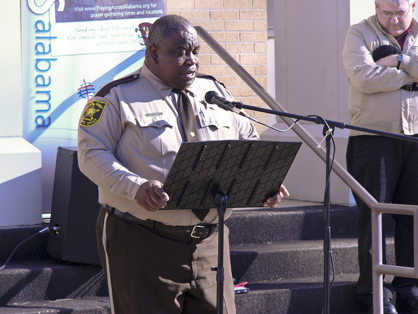 The Rev. William Curry, chairman of the Linden Board of Education, also prayed with the people in attendance, about the children across the state and the nation.

Giving devotional thought during the program was Dr. Bobby Dubois from the Alabama State Board of Missions.

“If we have any hope of making it as a nation, it’s through revival,” he said. “It’s not a matter of denomination or politics. It will take a change in lifestyle, not just one event, to make an impact on the people of America.”

Linden City Schools Superintendent George Baldwin led the crowd in a silent prayer, and Sheriff Richard Bates closed the program with a prayer.

Dubios said Praying Across Alabama is a call to prayer for everyone.

“The idea started in the Alabama Baptist Convention, but it is for all religious backgrounds,” he said. “It is an opportunity to call on the people. It’s just a good social gathering for people to get together and pray together.”