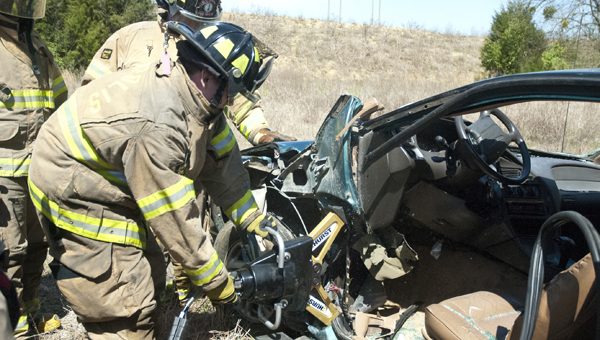 Demopolis firefighter Justin King lifts up the dashboard of a junked car while he trains with new extraction equipment the department recently acquired.

After a serious accident, the difference between life and death can be just a few seconds.

New equipment recently acquired by Demopolis Fire and Rescue may help save lives in the future.

Through a partnership with RockTenn, the department was able to buy new extrication equipment, which some people call the “Jaws of Life.”

The tools will be especially useful on heavy equipment, like 18-wheelers, trains and tractors, Tate said. 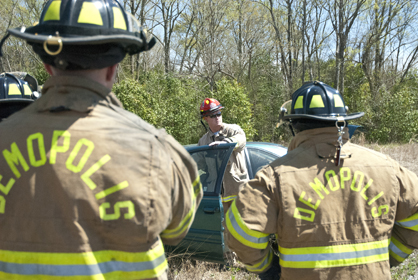 Chris Reed from MES trains Demopolis firefighters on how to use the new equipment.

The equipment was purchased from a company called Municipal Emergency Services, Inc. (MES) out of Tennessee.

Chris Reed, a rescue tool specialist for MES, was in Demopolis on Tuesday to train firefighters to use the gear.

DFR Training Officer James Bailey said the tools would allow first responders to get trapped people out of cars faster than ever.

With the new equipment, firefighters can cut straight through door hinges and pins, whereas the department was more or less prying doors off before now.

“This is going to speed us up getting into a car exponentially,” Bailey said.

RockTenn helped buy the equipment for the department, which has done training for the company’s maintenance crew, Tate said.