It was merely a month ago when attendees of the Demopolis Area Chamber of Commerce’s annual banquet saw the smile of former mayor Austin Caldwell as he accepted the Lifetime Achievement Award from his dear friend Woody Collins.

Today the city mourns the death of the former mayor that served Demopolis for 19 years. 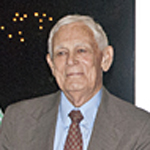 Caldwell, a Demopolis native, passed away the morning of March 23 at DCH in Tuscaloosa after being in the intensive care unit during the week, according to current Mayor Mike Grayson.

“I’ve known Austin Caldwell most of my life,” Grayson said. “I remember him doing the radio broadcast.”

Grayson said he heard the news early Saturday afternoon and was surprised.

Caldwell served as mayor from 1985-2004 and Grayson recalls being on the council that appointed Caldwell as mayor.

“We appointed him and he did an extraordinary job,” he said.

Caldwell is heavily credited with building the city’s financial reserves.

He was appointed mayor after Hugh Allen resigned due to receiving a job in Selma.

“Not only was Austin Caldwell a good mayor, he was a really good man,” Grayson said.

The funeral will be Tuesday, March 26 at 11 a.m. at First United Methodist Church in Demopolis. Interment will follow at Riverside Cemetery. Visitation will be Monday from 5:30-7 p.m. at Kirk Funeral Homes Demopolis Chapel.