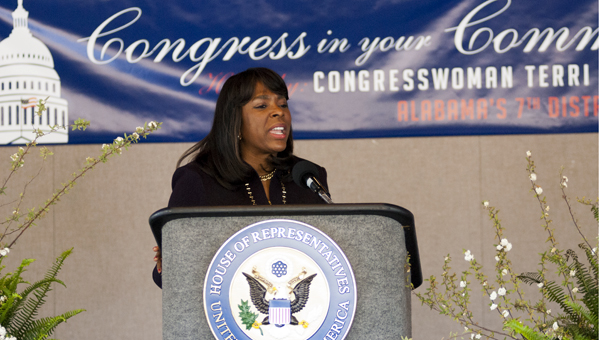 Congresswoman Terri Sewell visited the Demopolis Civic Center on Wednesday during her tour of the 7th congressional district.

Congresswoman Terri Sewell spoke to a group of about 50 people at the Demopolis Civic Center on Wednesday about what she is doing in Washington, D.C., to represent Marengo County and the 7th congressional district.

Sewell spoke about two local initiatives that she is working on, which would help bring jobs to her district. The first is a Blackbelt job fair that she plans to have in the area in August.

“Last year, we had a job fair in Birmingham, and over 5,000 people from this district showed up,” she said. “We want to bring one to the Blackbelt this year to give the people in this district a better chance to find good jobs.”

The other local initiative she spoke about was Project R.E.A.D.Y., which stands for Realizing Everyone’s Ability to Develop Yourself. It will consist of several workforce training workshops conducted through the 7th congressional district by career professionals in partnership with educational institutions and other members of the Congresswoman Sewell’s Workforce Advisory Council.

“I believe we have made a disservice to our young people by moving away from career and tech programs in high schools,” Sewell said. “Project R.E.A.D.Y. offers this training, and we will have one of these events in Demopolis in the near future.”

Sewell also addressed some of the things going on in Washington, such as sequestration.

“Sequestration is across-the-board cuts to achieve a goal,” she said. “Our goal is to save $780 billion per year to help the deficit. These cuts will be seen over time, but I believe this could be achieved better through targeting specific cuts, not having cuts across the board.”

Sewell is on the House Committee on Financial Services, and she said, with her background in finance, it is a good fit.

“Transparency and accountability are very important,” she said. “We want to avoid the situation we had recently with banks that were too big to fail.”

Sewell’s office offers a couple services to her constituents that she feels are very important.

One of these is a weekly Guide to Grants. This guide can be found on her website, www.sewell.house.gov. These guides show which grants are available and how to apply for them.

Another service they offer is the 7th Express newsletter that gives updates about what is going on in the district and in Washington.

Sewell closed by saying she is grateful to represent this district, her home, in Washington, and hopes to continue to help the people in the district.