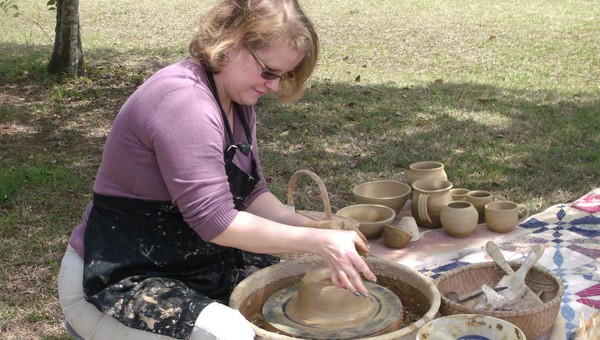 Kristin Law does a pottery demonstration during Heritage Days at Gaineswood.

Tucked away near the rear of the grounds of Gaineswood, James Vaughn could be found sitting under a shed-like covering strumming an instrument that could tell its own story.

“You ever saw one of these?” he would ask the crowd about the instrument that resembled a banjo or a violin. “It’s a dulcimer, it means sweet music.”

Vaughn’s live history demonstration was only one of many at the 13th annual Heritage Days event held on the grounds of Gaineswood from April 4-6.

Vaughn talked about the simplicity of how the instrument is played, but also about its heritage. He immediately drew spectators in with his keen knowledge of the instrument that was bred from the Scottish.

After allowing spectators to pluck away at the instrument themselves, it was not too long some first-time players even produced notes of the age-old tune, “Old McDonald Had a Farm.”

Vaughn then transitioned to offer a live history demonstration about the importance of blacksmiths in communities.

“Blacksmiths were one of the most important people in the community,” he said.

He spoke about their importance in the realms of architecture and demonstrated making nails for the children that attended during the week.

Eleanor Cunningham, Gaineswood director, was no stranger to fourth graders from Marengo and Hale County schools after she welcomed them to the event this past Thursday and Friday.

Cunningham said, since Gaineswood is open on the first Saturday of the month anyway, it just made sense for the presenters to stay so the public would have a chance to enjoy.

“We are in our 13th year of doing this event and this is the first time we have opened the event to the public,” she said.

Other components of the event included a music and storytelling entertainment portion by “Riverboat John,” general history information and the opportunity to explore the architecture of Gaineswood.

For Americorps VISTA Kristin Law, it still amazes her even after 16 years as a potter all the things she is able to make simply out of clay.

“It takes water, Earth and fire to make pottery. There is nothing else needed, but your imagination,” she said.

A pottery demonstration was just a taste of what several spectators of the Heritage Days event were able to enjoy throughout their time on the grounds of Gaineswood.

Law, representing Blackbelt Treasures, spoke about the importance of pottery and how it is traced back in communities as a necessity. “I speak with the kids about Indian pottery, Folk pottery and then pottery now.”

“I’m an architect  so I am very interested to see Gaineswood. It is such a beautiful day for this event, I mean we surely couldn’t have ordered a prettier day,” Don said.

Dogan said she has visited Demopolis before, but for Lynne and Don, it was their first trip to the area.

Moving on throughout the event, several spectators stopped to learn more about Choctaw Life from UWA representative Rosa Hall.

The cloth with the deer toes attached to it could be wrapped around the legs of the Choctaw women to make a beat when they danced.

“I have always come to this event,” she said. She said her demonstration includes more about the Choctaw, history about Gaineswood and Demopolis.

Though it may have appeared a little out of the ordinary to see a ‘Redcoat’ walking around in 2013, Brian Mast, UWA Blackbelt Museum representative, dressed the part to portray his live history demonstration.

“The event has gone very well,” he said. “I was drilling them (the school children) and marching them around the grounds and it was a lot of fun.”

Cunningham said the event originally began as an educational program for fourth graders and she was excited to see the event expand.

“We wanted to offer an event to give an overview of our cultural history in the Blackbelt,” she said.