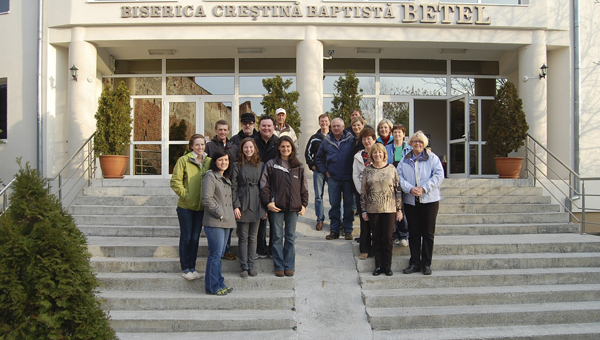 A group photo of the local residents that traveled to Romania.

Former Fairhaven pastor Allen Atkins gathered with his mission group after they distributed Christian materials in one of the government schools in Romania to bring to the forefront a strong observation.

“We went into the government schools and they let us speak to the kids and distribute our materials. The teachers were even asking us for these. I wanted the group to be aware that just 24 years ago…this was a communist school and now these kids are being taught, there is a God,” he said.

After he was able to allow that to sink in for a moment to the group, he went on to say, “But, we can’t do this at home.”

About 24 years ago, it would not have been common for an American group, or any group for that matter, to travel to the former Communist country Romania to spread the Gospel.

However, today, former Fairhaven pastor Allen Atkins and several other Demopolis residents have made The Great Commission a reality in that country.

The Great Commission of Christianity is the instruction of the resurrected Jesus Christ to his disciples that they spread his teachings to all the nations of the world.

“God blesses the Christian in the church that takes seriously the Great Commission,” Atkins said.

Fairhaven members likely recall a while ago when Atkins announced his venture into beginning the AMEN ministry.

Since, Atkins has traveled to Romania several times and as a part of the ministry, several local residents were able to join him on a recent journey there.

Included in the group was First Baptist Church pastor Carl Williams, who took his second journey to Romania as a part of the ministry.

“Originally our purpose was to do street evangelism, but we weren’t able to do as much as we wanted due to the rain and snow,” he said. “But, God opened up some doors for us to minister to some of the kids there.”

Williams said they spent time at one of the state run orphanages distributing bibles and speaking to children.

In addition, the group held worship services for people in four different villages. Other ministers on the trip included Atkins’ son, Daniel and Leslie Spiller, youth minister at First Baptist.

Every night the pastors rotated preaching in the villages. The spirit-filled atmosphere allowed them the opportunity to share a message in hopes of bringing worshippers closer to Christ.

The Romanian people were very welcoming and hunger for the Gospel, Atkins said. He said there were times when the weather could have been an obstacle for attendees, instead, they walked to the services even in the sleet and snow.

“To our knowledge, through the week, there were 84 people that prayed to receive Christ,” Williams said.

And, though the years Atkins has traveled to Romania, he said he has seen several hundred people come to Christ.

“What is a great confirmation, is to be able to go back and see people that have come to Christ still continue to grow,” he said. “When you see how God is using you and the difference you are hopefully making, you realize all the prayer, hard work and sacrifice is worth it.”

The trip granted local people, who had not been on a mission trip, the opportunity to share the Gospel abroad.

Atkins said about two-thirds of the group had never been on a mission trip.

“It was just amazing to hear some people say, ‘This changed my life’ and hearing them say they want to go back,” he said.

Moving forward, Atkins said he hopes the partnership between his son’s church, the AMEN ministry and First Baptist would be one that is ongoing. “We are already praying about next year,” he said.

Look for a full update about Atkins’ ministry, AMEN on an upcoming Faith page highlight.