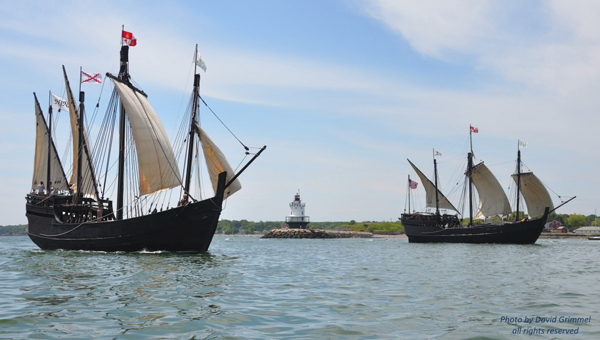 Replicas of the Nina and the Pinta will be in Demopolis from April 24-April 29 for people to board and tour.

The dates for the Nina and the Pinta being in Demopolis have changed slightly. They were originally schedule to be at the Kingfisher Bay Marina from April 24 to April 29. Those dates are now April 26 through April 30.

Boats and barges come down the river all the time, nothing special. But some ships coming this way in April might catch your attention.

On Friday, April 26, the Pinta and the Nina, replicas of Christopher Columbus’ ships, will be in Demopolis for tours.

The ships will be docked at the Kingfisher Bay Marina, Lock 4 Road, Highway 43 N., (next to Demopolis Yacht Basin) until their departure on Tuesday, April 30.

The Nina was built completely by hand and without the use of power tools. Archaeology magazine called the ship “the most historically correct Columbus replica ever built.”

The Pinta was recently built in Brazil to accompany the Nina on all of her travels. She is a larger version of the archetypal caravel. Historians consider the caravel the Space Shuttle of the fifteenth century. It was built between 2002 and 2006.

Captain Morgan Sanger, who has been captain of the Nina since the tours began in 1991, said the ships have plenty to offer for everyone.

“There are a lot of displays in the ships,” he said. “There is film of the construction of the ships, and we have very intelligent crewmembers that will answer any question people may have.”

Both ships tour together as a new and enhanced ‘sailing museum’ for the purpose of educating the public and school children on the ‘caravel’, a Portuguese ship used by Columbus and many early explorers to discover the world.

While in port, the general public is invited to visit the ships for a walk-aboard, self-guided tour.

“People can stay on the ship as long as they’d like,” Sanger said. “There is no time limit for the self-guided tours.”

Sanger said this is the second time the ships have come to Demopolis.

“The first time we were here was before the Kingfisher Marina was built,” he said. “The new marina should make it easier for us to dock so people can board the ships.”

Children 4 and under are free. The ships are open every day from 9 a.m. to 6 p.m. No reservations are necessary.

Teachers or organizations wishing to schedule a 30-minute guided tour with a crewmember should call 1-787-672-2152 or email columfnd@surfbvi.com. There is a minimum of 15 people for these tours, but there is no maximum. The tours are $5 per person. For more information, visit their website at www.thenina.com.