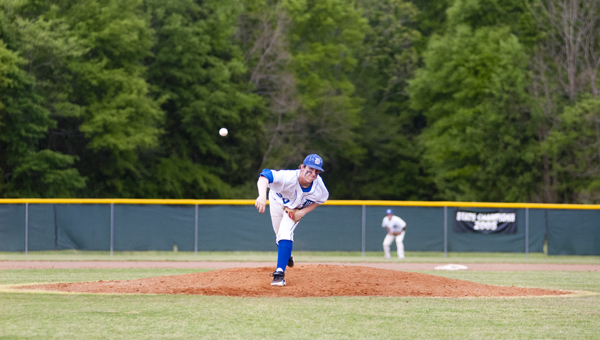 Demopolis junior Tyler Oates pitched a scoreless third inning for the Tigers in their 9-7 loss to Sweet Water on Tuesday night.

Mason Rogers, Walker Davis, Josh Mangum, Wesley Anderson, Will Tucker, Devin Stroud, Tyler Charleston and Brock Montgomery were all honored prior to the game during the Senior Day ceremonies.

Rogers got the Tigers on the board in the bottom of the first with a two-RBI triple. With Wesley Dunn on third as a pinch runner, a wild pitch by Tanner Luker brought him in to give Demopolis an early 3-0 lead.

In the bottom of the second, the Tigers added one more on an RBI double from Montgomery to bring the score to 4-0 in favor of Demopolis.

In the top of the fourth, with Davis on the mound, Sweet Water was able to put together a rally. RBIs from Fabian Ledsma, Tate Gibbs, Treyun Jones, Tre Pritchett and two from Luker, mixed with some fielding mistakes by Demopolis gave Sweet Water an 8-4 advantage.

Ledsma added another RBI to his total in the sixth on a single that brought home Brett Davis to make the score 9-4 in favor of the Bulldogs.

Demopolis got their bats going again in the bottom of the sixth and added two runs to pull themselves within three runs for the final inning.

In the bottom of the seventh, Demopolis got runners on second and third with one out to start the inning. Rogers grounded out, but brought in a run to make it a two-run game with two outs. The Tigers were unable to bring anymore runs across, ending the regular season with a 9-7 loss to the Bulldogs.

Head coach Ben Ramer said the game was very uncharacteristic for his team.

“We were certainly hoping to perform well here on Senior Day,” he said, “but there is no reason it should affect us Friday going into the playoffs. It was a very uncharacteristic game for us because we gave up a lot of runs. We don’t usually allow teams to knock it around like that.”

Demopolis will host the first round of the state playoffs Friday night and welcome Valley into town.

“Valley is a good team with some good pitchers,” Ramer said. “I feel good about our team and where we are, but we’re going to have to fight and battle to keep playing. We have to play well to keep going, and I’m looking for our best effort Friday night.”