Stella was an orphan in Moldova, a country tucked between Romania and Ukraine. She was handicapped and had aged-out of the orphanage at age 16.

At age 16, a child has to leave the orphanage. They are given the U.S. equivalent of $30 and a bus pass back to the village of their birth. Not knowing, if their parents are still alive or if there is anyone there they know to help them.

When Stella left, she became a target for human/sex trafficking. Men prey on girls that age-out of the orphanages, kidnap them and use them until they are beaten and broken, or worse, until they are dead, like Stella. 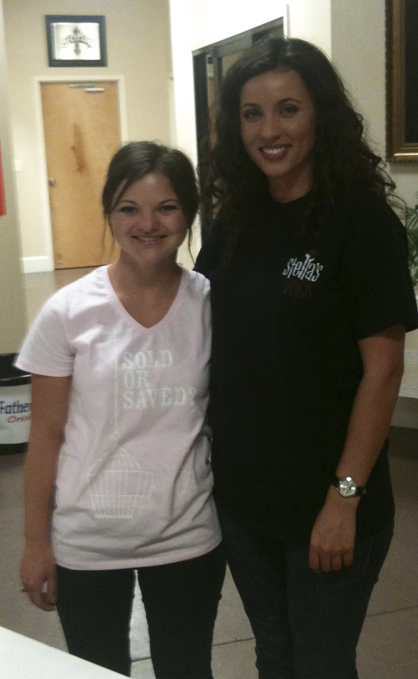 Youth groups from area Demopolis churches gathered at Church Aflame Wednesday night to learn more about how Stella touched Phillip Cameron and led him to begin a ministry to help girls just like Stella.

Stella’s Voice, provides a home for poverty-ridden girls in Moldova after they age out of the orphanage at 16. The organization also has a home for boys as well.

“One thing you can do about this is pray. And, when you pray, pray from the heart.” Jeff Taylor, youth pastor at Church Aflame told those in attendance Wednesday night.

Youth began the event with worship songs and prayer. Songs sung included, “There is Power in the name of Jesus.”

On the day Galina Telesau, of Moldova, turned four, she was abandoned by her mother and father.

After Galina was abandoned, she was placed in an orphanage with unlivable conditions.

“If you are an orphan, you are treated like nothing,” she said.

In the orphanage, sometimes they went without food. Another speaker at the event, Constantia Sacalova, said there was no heating system and sometimes, they were only able to take showers once a week. And, when they took showers, it was in cold water.

Galina and Constantia were fortunate to find Stella’s Voice, that gave them a home in Moldova. The ministry was also the first introduction the two had to learning about God.

“I am really happy I got the chance to know God,” Galina said. “I know God had a bigger plan for my life.”

While it was a message of the speakers to tell their testimonies, another lesson youth took away from the event is to be appreciative of their blessings.

“Do you realize today how blessed you are? Do you tell your parents thank you for this safe place? for this warm food? and for these nice clothes? But, one of the most important things, a thing you won’t be able to buy, do you tell them thank you for your love?” Constantia said.

The girls will continue to work with Stella’s Voice to give more girls a place to call home.