Birmingham — Alabama students were honored for their creativity and understanding of agriculture during Alabama Farm-City Awards on Thursday, April 11 in Birmingham.

Charlie Vickers of Marengo Academy placed second in the fourth- through sixth-grade division in the Farm-City Poster Contest. 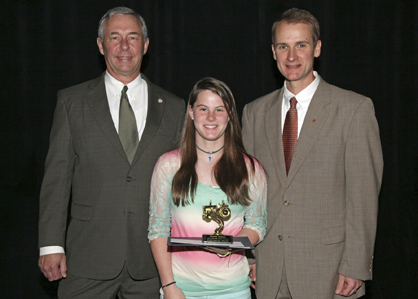 “These contests give students an opportunity to use their imagination and creativity while learning more about the interdependence of farmers and their urban neighbors,” said Alabama Farm-City Chairman Jeff Helms. “This year’s contest theme was ‘Grown Safely. Extra Tasty’ and challenged school children to look beyond the headlines about food safety issues and explore what Alabama farmers are doing to produce healthy, delicious food.”

The winners and their schools received $300 for first place and $200 for second place.

The top Multimedia Contest entry was played during the awards banquet, and the winning essays were featured in the event program. The state’s top Farm-City posters will appear in the 2014 Alabama Farm-City calendar. About 30,000 calendars are sold each year.

Observed the week before Thanksgiving, Farm-City Week began in 1955 as a way to foster cooperation and understanding between farmers and their city neighbors.