He was one of 24 inductees honored during special ceremonies at the Alabama 4-H Environmental Science Education Center. Norwood was nominated by Kathryn Friday, Marengo County Extension coordinator.

The Alabama 4-H Wall of Fame recognizes individuals and organizations that have had a significant effect on the 4-H Youth Development program, its members and leaders. The Alabama 4-H Club Foundation, Inc., and Alabama 4-H honors, remembers and pays tribute to those who influenced the lives of Alabama youth by their commitment “To Make the Best Better.” 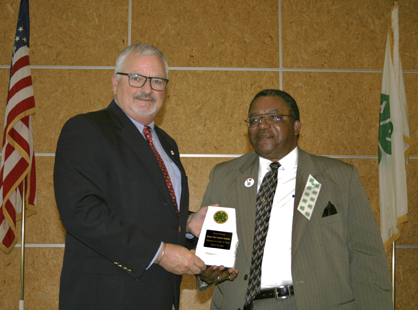 Lamar Nichols, assistant director for 4-H Youth and Development presents the 4-H Wall of Fame award to William Norwood for his work with 4-H in Marengo County.

Norwood began his ACES career in Marengo County where he served youth and adults for 25 years. During that tenure as a 4-H agent, he worked with 400 to 500 4-H’ers each year. He used programs to motivate students in a poor, rural county to seek to achieve and to believe that they could achieve.

He was instrumental in establishing landscape projects with 4-H’ers at local schools in Marengo County. The Board of Education was so impressed with the effort that they budgeted funds to landscape all schools in the county. He also conducted 11 successful Community Pride projects through Chevron USA. He conducted 10 annual 4-H Fish and Wildlife camps with an average attendance of 70.

Norwood conducted countywide 4-H hog and dairy shows. He worked with students to teach them how to prepare for those shows. County winners went on to win many awards at regional and state levels. His 4-H’ers were also winners in livestock judging events.

He laughingly recalls 4-H’ers from around the state calling him “Mr. 4-H.” But he adds that he proudly wore the green and white sports jackets, ties, pants and shirts.

William Norwood was also a valuable member of the Marengo County community. He was the first minority member of the Linden City School Board. He has been active in AACAAS and has served as District III coordinator twice. He received recognition from the Boy Scouts, ACESEO and too many other groups to list. He established the first farmers market in Marengo County. William Norwood is an adult willing to give whatever time needed to help young people.