Tigers overcome deficits to take game one in playoff series 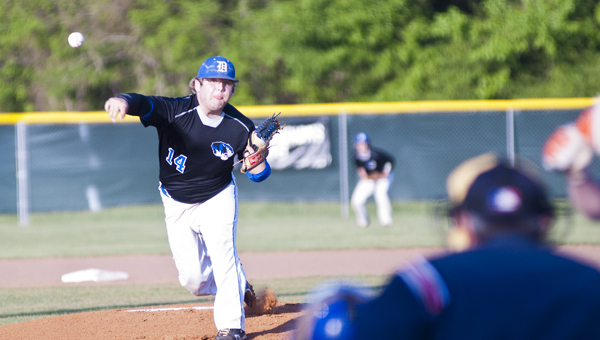 The Demopolis Tigers overcame three separate deficits Friday night before they came out on top of the Valley Rams in the first game of a three-game playoff series by a score of 9-8.

Mason Rogers went 1-2 with a walk, a sacrifice fly and a two-run home run to lead Demopolis to the win. He also pitched two scoreless innings for the Tigers.

“Mason was clutch for us tonight,” head coach Ben Ramer said. “That’s no different than all season long, though. He really came with it tonight.”

Will Tucker started the game on the mound for Demopolis, but Valley jumped out front early in the first inning, hanging four on the board before Demopolis ever took a swing. Drew Quinton led off with a single and was moved around to third on a bunt and a deep fly out. Brandon Foster scored Quinton on a single. A double by Joshua Meigs scored Foster and Blake Justiss, and a single from Tyler Wright scored Meigs to give the Rams a 4-0 lead.

Demopolis answered back in the bottom half of the first with Quinton on the mound for the Rams. A leadoff single from Matt Eicher and a double from Brock Montgomery that hit off the right field wall put the Tigers in good position to start the inning. Rogers brought in Eicher with a sacrifice fly, and Wesley Anderson scored Montgomery on a sacrifice of his own. Devin Stroud singled, and advanced to second on a passed ball. Another passed ball scored Stroud from second after the catcher lost the ball. The Tigers were able to close the gap to 4-3 going into the second inning.

Tucker held the Rams hitless in the second inning, and Demopolis was able to tack on one more to tie the game at four. Josh Mangum walked and advanced to third after a wild throw-over from Quinton. A single from Eicher scored Mangum.

In the top of the third, the Rams bats got hot again. Meigs singled and later scored on a single from Wright. The Tigers made a pitching change and brought in Michael Brooker with two runners on base. Brooker gave up a single to Quinton, and then walked Mathew Crews, which scored Wright. The Rams took a 6-4 lead going into the bottom of the third.

James Nix came into the game to pitch for Valley in the third, and did not give up a run, allowing Valley to hold their 6-4 lead.

Brooker then pitched a perfect top of the fourth to keep Demopolis within two.

Eicher singled to lead off the bottom of the fourth, and Rogers came to the plate two batters later with one out. He got a pitch he liked and powered it over the fence in right-center field to tie the game again at six.

Valley put the pressure back on the Tigers by scoring two in the top of the fifth. Crews and Foster both had RBIs in the inning to give the Rams the lead.

Demopolis did not waste any time in answering, though. Eicher knocked in Tyler Oates, Seth Aiken, who was pinch running for Brooker, scored on a wild pitch and Eicher later scored on a passed ball. The Tigers took a 9-8 lead in the inning and never looked back.

Rogers came in to pitch for Demopolis in the sixth and seventh, and struck out five batters to secure the game one win for the Tigers.

“It’s nice to get that first win out of the way,” Ramer said. “I can’t say enough about our guys battling back like they did. It felt like we just couldn’t get a lead, but I’m glad we had enough in the end.”

Game two will be at 11 a.m. Saturday, and game three, if necessary, will follow that game.