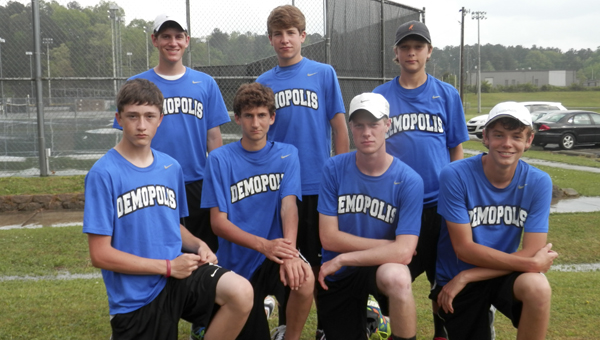 The Demopolis High School tennis team is headed to state for the second year in a row.

Under the direction of first year head coach Clay Massey, the Tigers have surpassed expectations to return to the state tournament in Decatur.

“We returned just one player from last year’s top six,” Massey said, “so the expectations weren’t very high. A lot of people thought this was going to be a rebuilding year.”

Massey added that two other players from last year’s team returned as well, but they were not in the top six last year, and did not play much. He said seniors Logan Boone and Chance Martin have done a lot, both on and off the court, to help the team get to where it is.

“We played Walker right before spring break and Logan, our number one player, beat their number one player,” Massey said. “That was huge for us and our confidence. It gave us the energy we needed to finish out the season strong.”

At the sectional tournament, Massey said he was unsure of how his team would play.

“We had played well during the season, but I didn’t know what we would look like at sectionals,” he said. “We ended up playing our best tennis of the season.”

“That match was the last one of the day, and all eyes were on it,” Massey said. “It was the focus of everything at that moment, and he pulled it through for us.”

In the second round of the sectionals, Carson Parten, Demopolis’ No. 4 defeated the No. 4 player from Chilton County, which resulted in a six-point swing for the Tigers to help them earn a second place finish at the sectionals.

Going into the state tournament, to be played Monday and Tuesday, Massey said he feels good about where his team is.

“I feel good, but we have to fight complacency,” he said. “There was a lot of joy and accomplishment coming out of sectionals, as there should have been, but I told them when we got here, ‘remember we have business to finish.’”

Boone earned a first-round bye in the tournament, but the rest of the team will be playing in the first round.

As for the future, Massey said it starts with the players on the team now.

“It’s going to start with these guys,” he said. “We will only lose two for next year, and their expectations should start to move to making state every year and competing for titles.”