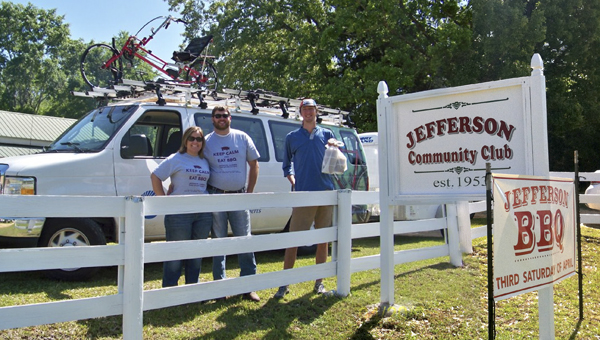 Jefferson Community Club hosted its annual barbecue on Saturday, April 20. The Club cooked more than 2,000 pounds of pork shoulders to serve to a sell-out crowd.

Joe Loviska of Missoula, Mont., is the visitor who traveled the farthest to feast on the hickory-smoked delicacy, whether or not he left home with that intention.

Loviska is a tour leader for the Adventure Cycling Association of Missoula. ACA is a nonprofit organization with the mission to “inspire and empower people to travel by bicycle.” The organization serves as a resource for cyclists who are interested in group tours of specific regions.

On Saturday, Loviska and his crew were making their way through Marengo County. He followed the smoke and aroma down Highway 28 to Jefferson, where he picked up barbecue and potato salad for his fellow cyclists to enjoy at their evening campsite. Loviska didn’t leave without a taste of homemade caramel cake. 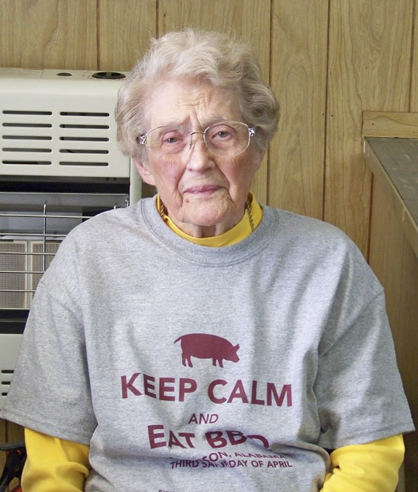 Loviska rotates travel days with a co-leader, and Saturday was his day to drive the crew’s van and equipment hauler. Loviska said that when he saw the beautiful weather and scenery that his co-leader was experiencing from behind the handlebars, he thought he was missing out on a treat. Stopping in Jefferson changed that, though.

“I feel like I definitely came out with the best deal today. This is such a treat. The scenery and landscapes here are beautiful, but this food is going to be really great,” Loviska said.

Club members urged Loviska to include the event as an attraction on the route and invited him to come back April 2014 for a second visit.

Jefferson Community Club hosts the all-you-can-eat barbecue on the third Saturday of April each year. Nearing its 40th year, the event serves as the primary fundraiser for the Jefferson Community Club, one of the oldest and last remaining groups of its type. Proceeds are used to maintain the clubhouse and make possible the club’s many community service projects.

Jefferson Community Club meets on the last Thursday of each month for a covered dish supper.