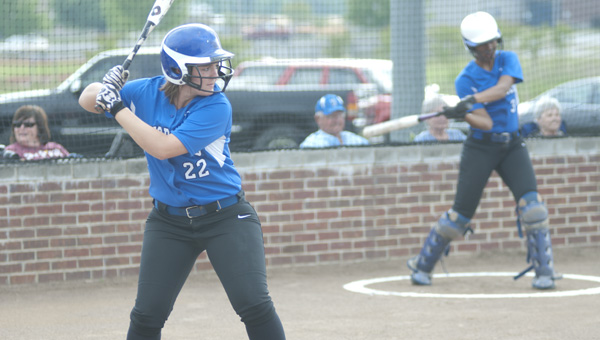 A walk-off home run from senior Alexis Jones gave Demopolis an 11-1 win over area foe Greenville on Senior Night. The win also guarantees the Lady Tigers home field advantage in the area tournament on May 3.

Jones, Victoria Washburn, Olivia Brame, Courtney Lawrence, Danielle Tatum, Zoe Lewis and Sydney Colyar were honored after the game for their commitment and dedication to the program throughout their high school careers.

“They have done a great job for us,” head coach Joey Browder said. “They’ve been the heart and soul of DHS softball since they’ve been here.”

Demopolis got on the board in the first inning on a single from Lewis that scored Colyar and Zarquashia Taylor, who was pinch running for Jones. The Lady Tigers took a 2-0 lead into the second inning.

In the top half of the second, Greenville cut the lead in half on an RBI single. This was the only run Lewis gave up throughout the game.

In the bottom of the second, Demopolis added three more runs. A two-RBI single from Washburn scored Jade Montgomery and Brame, and Lewis drew a bases-loaded walk to bring in Washburn.

Lewis shut down the Greenville offense in the third, fourth and fifth innings, and in the bottom of the fifth, the Demopolis offense got rolling.

Riley King led off the inning with a walk, and Lawrence singled in the next at bat. A throwing error by Greenville allowed King to score from first, but Lawrence was thrown out at third. Montgomery then singled, and moved to second on a passed ball, then to third on a wild pitch. Brame then walked and stole a base to get to second. Montgomery scored on a throwing error by Greenville to make the score 7-1.

Washburn was next at the plate, and she singled and drove in Brame, who was on third. Tatum was hit by a pitch in the next at bat, and Colyar reached first on a fielders choice force-out at third base. With the score at 8-1, Jones came to the plate. She got a pitch she liked and drove it over the left-field wall for a three-run home run that ended the game due to the 10-run rule.

Browder said earning home field advantage for the area tournament is huge for his team.

“That win concreted us hosting the area tournament, and that’s huge for us,” he said. “Playing at home in that tournament will help out a lot. We are continuing to come together and play well, and I like the direction we’re going right now.”