DPD arrests another in drug operation

The Demopolis Police Department has made more than 30 drug arrests has part of its operation “Gemini.”

It’s latest though might be the farthest — Terrence McNealey was arrested in Toledo, Ohio, where investigators picked him up from the Lucas County Jail.

McNealey, of Demopolis, was arrested April 24 and charged with two counts of distribution of controlled substance and contempt of court-failure to appear. 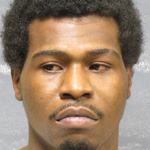 The arrest was the latest one of “Gemini,” which has seen more than 30 arrests following a 14-month undercover drug operation. DPD Police Chief Tommie Reese says more arrests are still to come.

Reese praised his officers for their continued efforts in keeping Demopolis a great place to live.