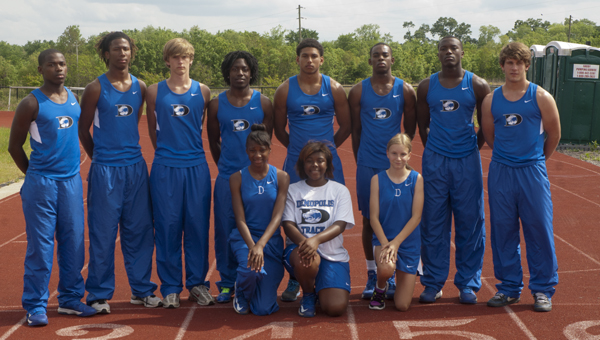 Twelve members of the DHS track team qualified for the state meet. Shown on the front row, from left, are Darneshia Harris, Samantha Williams and Gracie Boykins; and on the back row, from left, are DJ Howell, Rodney Harper, Alston Dinning, Tommy Wilson, Demetrius Kemp, Bobby Taylor, Cortez Lewis and Peyton Pearson. Not pictured is Tyler Coleman.

The Demopolis High School track team competed at the sectional meet over the weekend and 12 athletes qualified for the state meet to be held May 3-4.

In the 4×400-meter relay, the team of Rodney Harper, Demetrius Kemp, Cortez Lewis and DJ Howell finished second with a time of 3:29, which is a season best, to earn a spot in the state meet in Gulf Shores.

In the 4×800-meter relay, Howell, Harper, Peyton Pearson and Alston Dinning ran a time of 8:54 to qualify for state.

Bobby Taylor will be going as an alternate for both of the relay teams.

In the high jump, Tommy Wilson will be representing Demopolis, and Kemp will also be in the long jump at state after jumping his season-best 21-feet, one-inch.

For the girls, Darneshia Harris qualified for the 400-meter dash with a time of 1:06. In the 1600-meter run, Gracie Boykins ran a 6:03 to qualify, and Samantha Williams qualified in the shot put with a throw of 28-feet, seven-inches.