Demopolis soccer falls to Moody in round one of playoffs 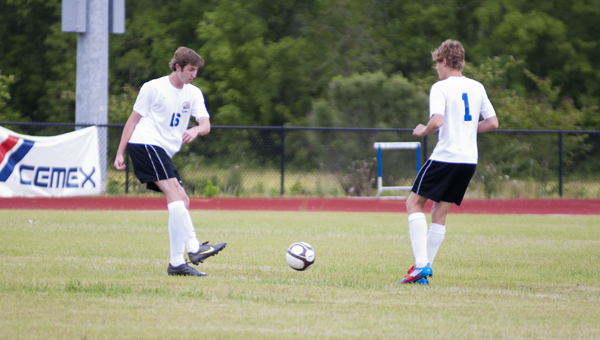 Austin Brooks and Adam Brooker kick off for Demopolis after Moody scored in the opening minutes of the playoff game held Tuesday night. The Tigers fell 4-1.

In the program’s first ever home playoff game, the Demopolis Tigers boys soccer team fell to the Moody Blue Devils 4-1.

Early in the first half, Moody jumped out to a 1-0 lead, but Demopolis came right back down the field to tie the game.

Austin Brooks scored on a pass from Jeremy Chu to even the game up, just six minutes in.

The game remained at 1-1 through the rest of the first half, and the teams went into halftime with the tie.

Moody changed their strategy in the second half, and the Tigers gave up a goal just a few minutes into the half.

Demopolis’ Adam Brooker had a chance to tie the game up, but the shot bounced off the right pole of the goal.

Moody was able to add two more goals in the half to pull away from the Tigers and advance to the next round of the Class 5A playoffs.

“We just didn’t want it as much as they did,” Jackson said. “We didn’t play the ball to the outside like we should have after they took the middle away from us.”

Jackson told his team after the game to not leave the field with their heads down, because they had a good season and accomplished a lot of good things.

“I’m proud of our season, but I expected us to do better than we did,” he said. “This doesn’t end today, though. The soccer season is year round. We have to keep working and training for next year.”

The Tigers final record for the season was 10-11-1, and the Tigers won the area outright for the first time in program history.