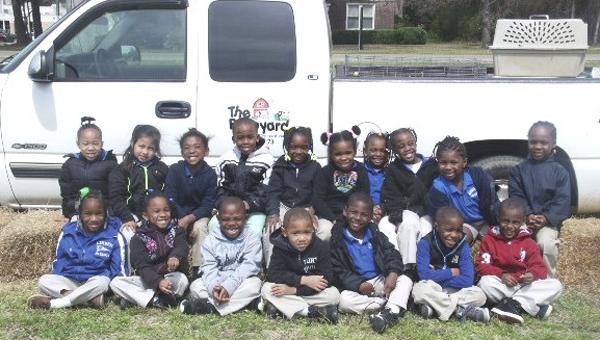 When Lisa Martin’s Pre-K students at Linden Elementary School learned about farm animals this month during a two-week farm unit, she made the lesson come alive for them with a field trip — for the farm animals, that is.

The Pre-K students didn’t have to go to the farm; instead, the farm came to them thanks to The Barnyard of Tuscaloosa, a traveling collection of farm animals including chickens, roosters, chicks, ducks, ducklings, goats, kids, sheep, lambs, pigs, rabbits, turkeys and a miniature horse.

Martin describes the experience for her students with great enthusiasm, particularly since it was a total surprise.

“The children had no clue that The Barnyard was coming,” she said. “All Ms. Williams and I told them on the day of the event was that there would be a surprise for them after lunch. They were very surprised and excited, and I don’t think any of them would have ever guessed that their surprise would include holding baby bunnies, chicks and ducklings and petting many other animals. Some of the students had never seen some of the animals that were part of The Barnyard, and the majority of them had never had the opportunity to interact with animals other than dogs or cats. Our students even had the opportunity to bottle feed a lamb and a kid. They are still talking about the day the farm animals came to visit.”