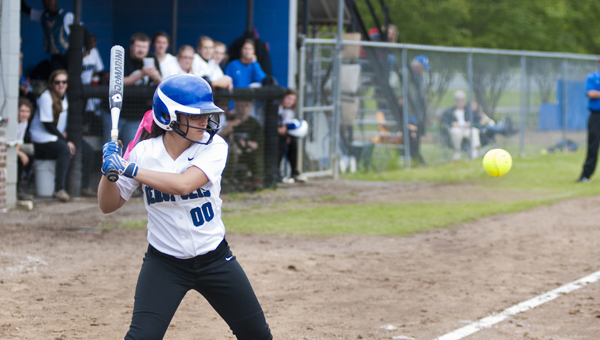 Victoria Washburn bats for Demopolis in their game against Greenville in the Class 5A, Area 6 tournament.

The AHSAA Class 5A, Area 6 softball tournament was held Monday in Demopolis after being postponed twice due to bad weather. Demopolis won the tournament and Selma finished second.

Greenville took game one 11-8, and faced Demopolis in game two. Danielle Tatum pitched for Demopolis, and held the visiting Tigers to a shutout.

Demopolis jumped out front early with the help of the Greenville pitchers. Sydney Colyar hit an inside-the-park homerun in the bottom of the first to score Tatum and herself. The Lady Tigers scored four more runs in the inning, but all four runners scored on wild pitches. Jessica Adams, a courtesy runner for Alexis Jones, Zoe Lewis, Courtney Lawrence and Jade Montgomery all scored on wild pitches in the first inning. 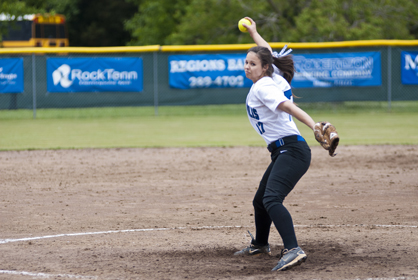 Greenville went three up, three down in the second, and Demopolis added six more runs to their lead in the bottom half of the inning.

Lewis knocked in Colyar on an RBI single to give Demopolis a 7-0 lead. Adams, running for Jones, scored on a wild pitch, as well as Lawrence. Olivia Brame scored on a throwing error, and Colyar drove in Victoria Washburn with an RBI double. Demopolis took a 12-0 lead into the third inning.

Greenville was unable to get any base runners in the third, and Demopolis took advantage of more lackluster pitching by Greenville.

Lewis and Riley King both scored on wild pitches, and Montgomery drove in Lawrence on a groundout to end the game with the 15-0 run rule.

This matched Greenville and Selma once again to determine who would play Demopolis for the area championship.

In the third game of the day, Greenville got on the board first in the top of the first inning to go up 1-0 on the Lady Saints.

Ayana Moore of Selma drove in Charmekia Moore, and Shaquira Livingston drove in Jashaun Davis to give the Lady Saints the advantage going into the second inning.

Greenville got two runners on base in the second, but wasn’t able to make anything happen, and Selma added to their lead in the bottom half of the second.

Charmekia Moore drove in Breonda Hall, and Takeesha Wilson scored on an error from Greenville. A two-run triple by Davis scored T’keyah Harris and Charmekia Moore, and Livingston drove in Davis to give Selma a 7-0 lead after two innings.

The third inning was quiet for both teams with no runs scoring, then both teams got going offensively again in the fourth.

Greenville added two runs in the top half of the inning to make the score 7-3, but Selma got both runs back in the bottom half of the inning on a home run by Harris and an RBI single from Livingston that scored Davis to give Selma a 9-3 advantage after four.

Greenville loaded the bases in the top of the fifth, but wasn’t able to capitalize. Selma added to their lead in the bottom half of the inning on an RBI single from Harris and an RBI double from Charmekia Moore.

The final matchup of the tournament was Demopolis against Selma. The Lady Tigers continued their hot offense in this game with Lewis on the mound, winning the game 15-0 in four innings.

Selma led of the second inning with back-to-back singles, but a strikeout and two groundouts ended the inning for the Saints.

Demopolis added five more in the bottom of the second. An RBI double by Jones and an RBI triple by Lewis scored the first two runs of the inning, then Taylor, running for Lewis, scored on an illegal pitch. Lawrence also had an RBI double, and she then scored on a wild pitch.

Lewis shut down Selma in the top of the third, and Demopolis added more runs in the bottom half of the inning. 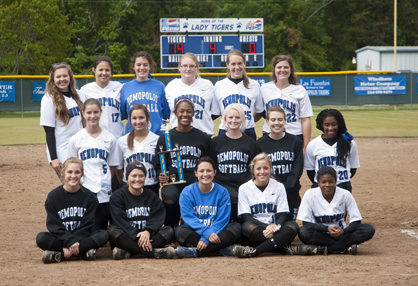 Selma went three up, three down in the fourth, and an RBI single by Jones that scored Tatum and a wild pitch that scored Colyar ended the game, giving Demopolis the 15-0 victory.

Demopolis and Selma will both play in Troy on Friday in the region tournament.

Selma head coach Mark Fedor said his team is young, and they are going to work on everything between now and the region tournament.

“We don’t have any seniors on this team, so we’re going to be working on everything this week,” Fedor said. “I’m very proud of our girls for their accomplishments this season. This is the first time we’ve been past the area tournament in a long time. The community should be proud of what they’ve accomplished.”

Demopolis head coach Joey Browder said the Tigers have to focus on their bats this week to prepare for the region tournament.

“We have to work on our bats a lot,” Browder said. “We are going to see a lot of different pitch types and adjust our bat speeds. We had a great attitude all day today, and we played together. I like the way we’re playing right now.”

There were 12 players named to the all-tournament team, and they are as follows:

Zoe Lewis of Demopolis was named the tournament’s Most Valuable Player.

Demopolis will face Marbury High School on Friday at 3:30 p.m. in Troy in the region tournament. Selma will face Valley High School at 5 p.m. Friday in Troy.