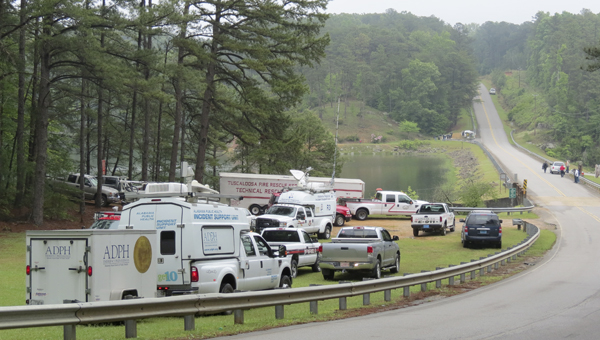 The Demopolis Fire and Rescue Haz-Mat team participated in an AMAS regional drill in Tuscaloosa on Tuesday.

Nine Haz-Mat responders from Demopolis Fire and Rescue traveled to Tuscaloosa on Tuesday as part of a regional training exercise.

Capt. James Bailey, training officer for the Demopolis department, said the main goals of the exercise were to establish teamwork and building a relationship with the Haz-Mat team from Tuscaloosa.

“If something happens in Demopolis like a derailed train that spills hazardous materials, the Tuscaloosa team is our backup,” Bailey said. “We would make a call to the central office in Clanton, and they would send the Tuscaloosa team down here to help.”

In the simulated exercise, the Demopolis Haz-Mat team was called on to aid the Tuscaloosa team at Lake Nicol Park in Tuscaloosa. The mock drill concerned a tanker spilling diesel fuel and oil products into a ditch and eventually the lake.

The two Haz-Mat teams had to work together to stop the leak from getting into the lake more than it already had, and also stop the leaks from the “tanker,” or “Leak Monster,” as the simulation tank is called. 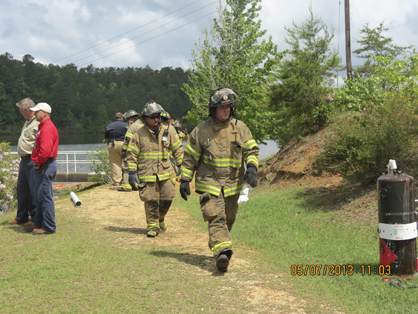 Lt. Justin King and Firefighter Sam Curtis of Demopolis Fire and Rescue participated in the AMAS regional drill in Tuscaloosa on Tuesday.

“Our goals were to patch the simulated leak and stop the flow of product, dam the ditch with an underflow dam and work to deploy boom to contain product that has already reached the lake,” Bailey said. “Our teamwork was and team building was spot on, and we accomplished what we went up there to do.”

Bailey added that it was hard to notice that the two teams had not worked together before.

“Other than having slightly different color gear on, you couldn’t tell it was two different teams working out there,” he said. “Our guys worked from the bottom to the top in the operation, doing everything they had to do.”

Bailey said the teams plan to do more exercises together, probably two or three times a year, to stay familiar with each other.