Rotary Club raises most ever with golf tournament

The Demopolis Rotary Club hosts the tournament every year, and this year, the club raised $11,282.70. Half of the proceeds go to Camp ASCCA, and half go to local charities. 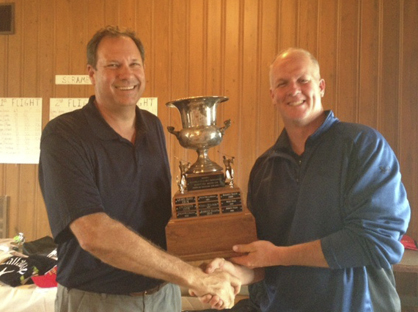 Rotarian and Tournament Organizer Bill Meador (left) presents the winner’s trophy to Paul Garner of Selma, who won the Rotary Charity Golf Tournament for the second year in a row.

Jay Reynolds of the Demopolis Rotary Club said they had 100 golfers come out for the tournament. Forty of them were in the four-ball competition, and 60 were in the scramble competition.

“We were lucky to get any golf in, the way the weather was,” he said, “but we had a great turnout and raised a lot of money for charity.”

On Thursday, May 2, there was a putting competition that Joe Parr won in the sixth round. He donated his $690 in winnings back to the club.

The money raised this year was the most in the 40 years of the tournament.