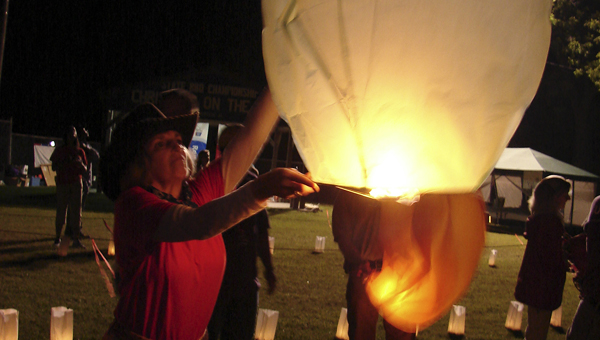 Sky lanterns were released in memory and honor of those who have battled cancer at Relay For Life.

For some, Thursday was just another day, but for Robert Goodsell it marked the day he was told he was cancer free.

After being diagnosed with small cell lung cancer on Dec. 2, 2012, Goodsell credits God for him being able to be deemed a cancer survivor. 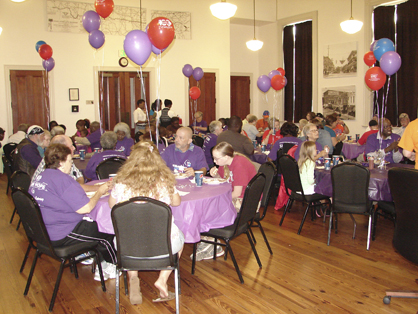 A special dinner for cancer survivors was held at Rooster Hall on Thursday evening prior to Relay For Life.

Goodsell relocated to Demopolis after being displaced by the BP oil spill. He previously lived in Florida.

Another survivor, Betty Traylor’s story was certainly one of triumph. Her cancer symptoms began with her seeing a small spot in her eyesight.

After testing and a biopsy, she was diagnosed with cancer. Though, Traylor still wears a patch over her eye, it didn’t stop her for telling her story to those who sat with her at the survivor’s banquet.

Sue Duke was another survivor in attendance, who overcame ovarion cancer. 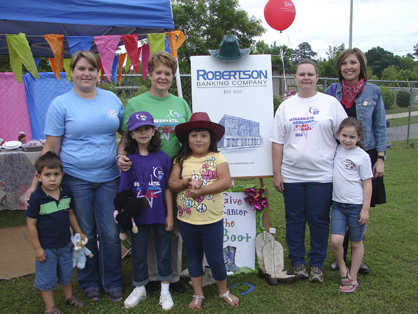 The Robertson Banking Company team gave the “boot to cancer” with a Western-themed booth.

Another survivor, Sandy Lynch also enjoyed Friday’s events. Lynch found out she had breast cancer during a doctor’s visit about something else.

“I just thank God he had his hand on me,” she said. “Sometimes I did think, Why me? But, God has opened doors for me to use this experience as a testimony to give honor and glory to him.”

Lynch said she believes in the message of Romans 8:28 (NIV), which reads, “And we know that in all things God works for the good of those who love him, who have been called according to his purpose.”

For more about Relay For Life 2013 see Wednesday’s newspaper.