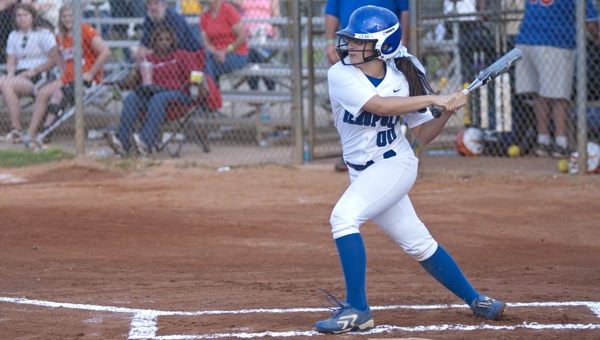 In the second game of the night for Demopolis, the Lady Tigers faced Chilton County in a win or go home matchup.

Both team’s bats were hot, but Demopolis made a few more plays than Chilton County and came away with the 13-11 victory.

“That was a total team effort,” head coach Joey Browder said. “We refocused and got the job done.”

Demopolis struck first in the top of the first inning when Alexis Jones brought in Victoria Washburn on an RBI single.

In the bottom of the first, Chilton County responded by hanging four runs on the board and batting through their lineup.

Demopolis struck for four runs of their own in the top of the second to take a 5-4 lead. Zoe Lewis knocked a two-RBI single that scored Jade Montgomery and Olivia Brame, and Washburn scored on an error. Jones brought in Zarquashia Taylor, who was running for Lewis.

Demopolis’ lead didn’t last long though, as Chilton County scored four more runs and batted through their lineup for the second straight inning to take an 8-5 lead.

Chilton County added two more in the third to increase their lead to five at 10-5.

In the fifth, Demopolis’ bats got hot. The first two batter of the inning, Riley King and Courtney Lawrence, reached on errors. Montgomery then brought in King on an RBI single. Lewis added to more RBIs on a single that scored Brame and Washburn. The next batter at the plate, Sydney Colyar, hit a two-run home run that tied the game at 10. Three batters later, King hits a two-RBI double that scored Jones and Danielle Tatum.

Demopolis took a 12-10 lead heading into the bottom half of the fifth inning. Chilton County responded by going three up, three down in the bottom of the fifth.

Demopolis added one more run in the top of the sixth on an RBI single by Colyar that scored Montgomery to take a 13-10 lead.

In the bottom of the sixth, Chilton County was able to load the bases, but Tatum pitched out of the jam without any runners scoring.

Demopolis went three up, three down in their half of the seventh, and Chilton County did everything they could to make things interesting in the bottom half of the inning.

They were able to score one run, but Tatum got the Lady Tigers out of the inning and extended the season.

“We’ve got to come back tomorrow and refocus,” Browder said. “We have to bring the enthusiasm we had in this game tomorrow. We’ve battled all year, and we have to keep battling.”

Demopolis will face Valley at 11 a.m. on Saturday.