Webb, who Causey called a young man of more than high character, lost his life Friday morning in a car accident on Highway 43.

“He was a Christian who spread his faith by his actions and the way he lived his life,” Causey said. “He never saw adversity, he just always saw opportunity.” 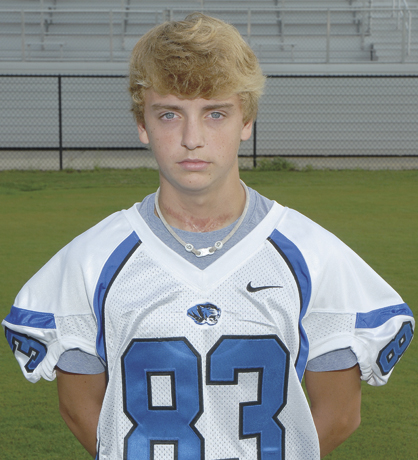 Webb, the son of Freddie Ray Jr. and Jamie Nell Waters Webb, died in a two-car accident before school Friday morning. Troopers continue to investigate the accident that happened at 7:45 a.m. just inside the Greene County line, according to Alabama State Trooper Sgt. Steve Jarrett.

Vehicles involved were Webb’s 1996 Toyota Tacoma pickup truck and a 2012 Volvo 18-wheeler. The other driver, Marty Goodman, 52, of Gordo, was wearing a seat belt and was not injured.

The Emergency Management Agency, Alabama Department of Environmental Management and the Army Corp of Engineers were called to the scene because of a small fuel leak.

Webb, 16, was a tenth-grader at Demopolis High School and participated in DHS athletics. He was No. 83 on the DHS Tigers football team and played soccer. He also has a sister at DHS.

Causey said Webb came to the Tigers his freshmen year, and he was getting more time on the field during spring training before his junior year.

“He never saw the negative in a situation. He was always positive, which is a quality that is so rare in people. He was always a happy person,” Causey said.

In addition to Webb’s contribution of the football field, he was a hard worker on the soccer field as well, according to DHS soccer coach Keith Jackson.

“I mean he put in all the time we asked of him and even additional time,” he said. “Sometimes he would go home with his dad and work on weight training. He just went above and beyond.”

Jackson’s experiences with Webb date back to middle school, and he has seen the young soccer player grow throughout the years.

“He was the kid that picked up the morale of the other kids, he always wanted to encourage and motivate others,” he said.

The Webb family has overcome adversity in the past when Cody as well as other members of his family was in a car accident about seven years ago.

The tragedy came on the same day DHS seniors were to celebrate their accomplishments during the school’s honors and awards day.

This year’s program had a solemn mood and many cried when DHS principal Leon Clark spoke about the accident at the end of awards day.

“Our students, our faculty and our community need your prayers at this time,” said Clark.

Though the young student and athlete lost his life Friday, he leaves his memory with those close to him.

“I learned a lot more from him than he learned from me,” Causey said.

Funeral services will be held Sunday, May 12 at 3 p.m. at Fairhaven Baptist Church in Demopolis.  Burial will follow at Demopolis Memorial Gardens.

In addition to his parents, Webb is survived by sister Victoria and brother Gavin and other family members and friends.

In lieu of flowers, memorials may be made to the DHS Sports Scholarship at Trustmark Bank.