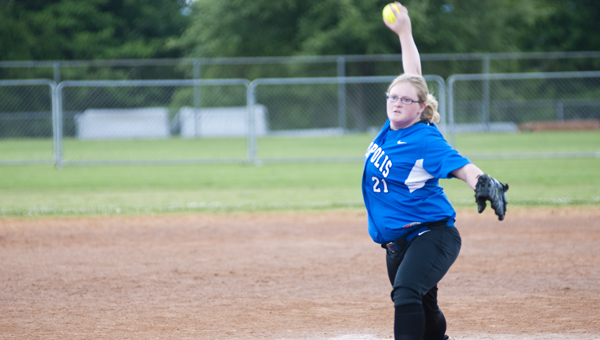 Demopolis’ Zoe Lewis pitched into the sixth inning for the Lady Tigers on Saturday against Valley, surrendering only two runs.

The Lady Tigers had split their two games on Friday, making Saturday’s game an elimination game.

Zoe Lewis started the game for Demopolis and pitched into the sixth inning, only giving up two runs. The Lady Tigers’ offense struggled throughout the game against Valley pitcher Lexus Burrows.

“We had opportunities throughout the game,” head coach Joey Browder said, “we just weren’t able to capitalize and make adjustments at the plate.” 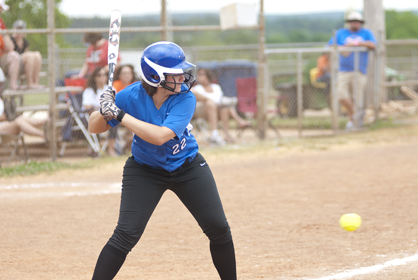 Demopolis’ Sydney Colyar watches a pitch go by in the game against Valley on Saturday. The Lady Tigers lost 3-0.

Valley scored first in the third inning off of a solo home run, then added their second run in the fifth on an RBI double. In the top of the sixth, a wild pitch brought in their third and final run of the game.

Demopolis threatened in the bottom of the sixth by loading the bases, but the Lady Tigers could not bring a run across the plate. Lewis walked to start the inning, and Alexis Jones singled, followed by Danielle Tatum reaching on an error, but they could not keep it going.

In the bottom of the seventh, down to their final three outs, Courtney Lawrence led the inning off for Demopolis after legging out a grounder that the first baseman dropped. Demopolis wasn’t able to move the runner over after a strikeout and a popout, then Victoria Washburn walked to put the tying run at the plate. Valley’s Burrows then got the strikeout to end the game.

Browder thanked the seniors on the team for all of their hard work during their time in the program, and said the success of the program isn’t always a reflection of the scoreboard.

The seniors on the team were Olivia Brame, Sydney Colyar, Lewis, Washburn, Tatum, Jones and Lawrence.