Another arrest in undercover drug operation

Rowser’s arrest was a part of the recent drug operation called “Gemini” that was conducted by the Demopolis Police Department that concluded with over thirty (32) drug dealers arrested following a 14-month undercover drug operation in the City of Demopolis. 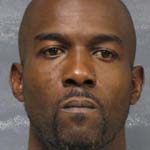 DPD investigators traveled to Birmingham and picked up Rowser who left the area after the roundup started.

The Demopolis Board of Education appointed Jim Stanford to be president of the board for the 2013-2014 school year during... read more