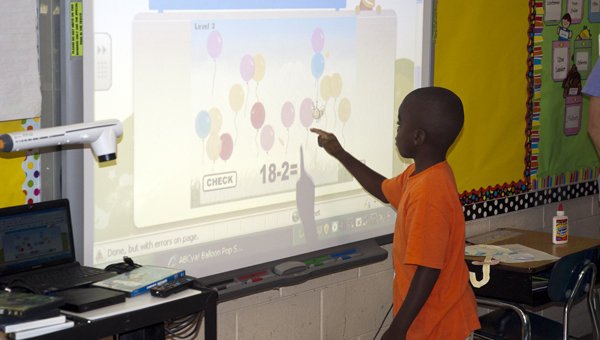 Za’varis Knott uses the interactive whiteboard in Amanda Meadows’ class at Westside Elementary. Demopolis Middle School and Demopolis High School will be receiving these boards over the summer as part of a system-wide technology upgrade.

A new technology project will provide major upgrades for Demopolis Middle School and Demopolis High School, as well as upgrades in both elementary schools.

In a board meeting on Monday, May 20, the board approved the $3.4 million upgrades.

Both schools will be receiving interactive whiteboards like Westside Elementary and U.S. Jones Elementary already have in their classrooms.

The school system’s technology director Jeremiah Dial said that right now, the middle school and high school are in the bottom 10 to 15 percent in the state in technology.

“We will add around 160 access points,” Dial said. “We want to make sure the infrastructure is done the right way.”

He added, “I would rather see the one-to-one be implemented because it would be our devices and we could abide by the Children’s Internet Protection Act a lot easier. It would be a little bit more costly for the system, but it would be easier to control, and we could guarantee every student would have a device. With BYOD, some students may not be able to afford a device, and they would either not have one, or we would have to provide one anyway.”

Dial added that all of the major technology companies have great leasing and financing programs for whichever direction the system wanted to go, as well as great warranties.

In addition to all of the infrastructure upgrades, the security and communication systems will be upgraded as well.

All of the security cameras on each campus will be replaced with upgrades, and they will be tied into a new phone system, which will allow each teacher to receive a message if there is a security issue.

Every teacher will be receiving a new phone in their classroom, and the new phones will be more than just phones.

“We’re not just getting new phones,” Dial said, “we’re changing the way we do business, and our business is educating children. The cameras and phones will be integrated, and an audio and visual presence of a warning will be sent to the teachers.”

The phones will give an alert in the classroom if the security cameras detect a threat, and a picture will be sent to the teachers’ email of the person they need to be aware of. The phones will also serve as intercoms.

Dial said there is also a lot of professional development included in the cost of the upgrades to make sure that teachers know how to use the new equipment so the students get the most out of it.

“I’m really excited about this project,” Dial said. “It’s really a privilege to be able to do this. I’m a product of Demopolis High School, and that’s where I got my start.”

He said the reason the middle school and the high school fell behind were mainly due to how quickly technology changes.

He said he hopes to have a majority of the installations done by the start of the next school year.

“The waiting game will be with the shipping of the equipment,” he said. “I’m hoping the majority of it is done by August.”