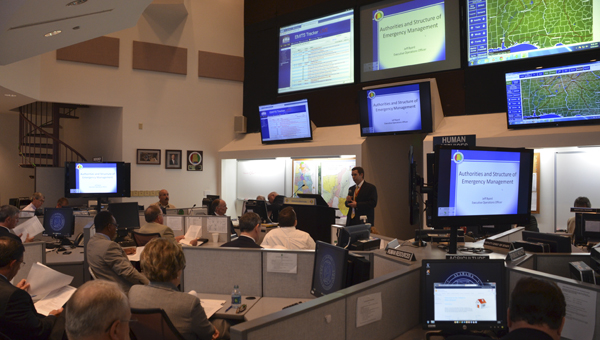 Jeff Byard, executive operations officer with Alabama’s Emergency Management Agency, talks to about 60 participants of a preparedness workshop Thursday at the Emergency Operations Center in Clanton.

By STEPHEN DAWKINS | The Clanton Advertiser

With thoughts of the deadly storm Monday in Oklahoma at the front everyone’s minds, and lessons learned from the April 27, 2011, tornado outbreak in Alabama on everyone’s lips, state officials gathered Thursday at the Emergency Operating Center in Clanton to discuss their response to natural disasters and other emergencies.

About 60 representatives of organizations ranging from the American Red Cross to the Alabama Department of Agriculture–anyone who would have a role in the state’s response to an emergency–met for a preparedness workshop that coincides with the ongoing tornado season and the hurricane season that begins June 1.

“It’s not a matter of ‘if,’ it’s a matter of ‘when,'” Gov. Robert Bentley said about the prospect of state agencies having to put their plan into action. “We want to always be prepared for the natural disasters that come our way.” 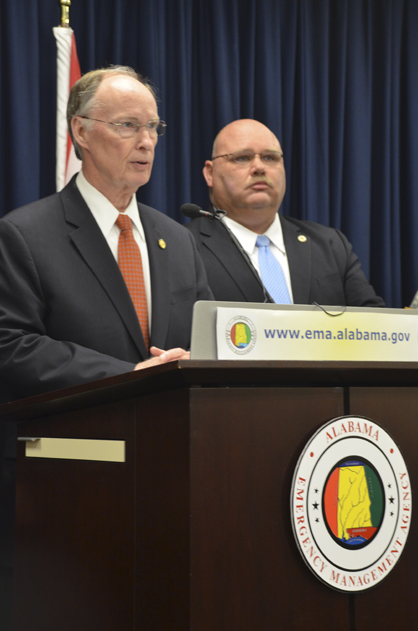 Bentley said an important lesson was learned in the aftermath of the tornadoes that killed more than 230 in the state two years ago.

“Everything is done best if it’s done on a local level,” he said.

So, a focus of Thursday’s workshop was localizing emergency response by emphasizing the assessments of local responders in decisions made about what is needed in a given area following a disaster or emergency, Bentley said.

Alabama Emergency Management Agency Director Art Faulkner said residents have a responsibility to be prepared, just like government does.

Faulkner encouraged anyone wanting help formulating a plan to contact their local EMA office. Marengo County EMA can be reached at (334) 295-8870.