DHS Class of 2013 sets out to ‘achieve excellence’ 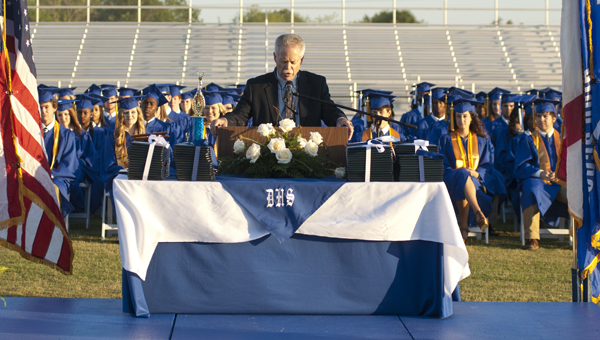 Demopolis High School principal Leon Clark addresses the graduates and everyone in attendance during the graduation ceremonies held Friday night at the football stadium.

One hundred forty-one students from Demopolis High School walked across the stage Friday night at the football stadium for graduation.

The DHS Concert Band ushered in the graduates by playing “Pomp and Circumstance” during the processional, as hundreds of parents, siblings and friends looked on. Class president Sutton Aiken then led the crowd in prayer.

In her salutatory speech, Alexis Jones reflected on the groups’ road to graduation and the journey in which they are about to embark.

“Where we are today is a result of 13 years of memories,” Jones said. “While at this school, we’ve seen a state championship in football, a community come together to save a man’s job, and our powderpuff team went undefeated.” 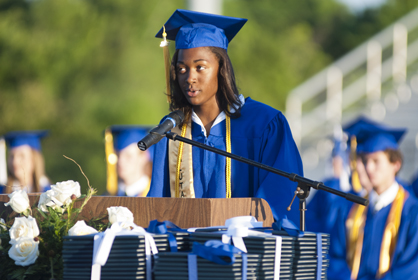 With bits of humor sprinkled in her speech, Jones said her class is full of unique personalities.

“Our class looks at things in a different light,” she said. “We didn’t get here on our own. It was a group effort. We had coaches, teachers, friends and parents helping us along the way.”

She also touched on those that they have lost in their young lives.

“We should remember those that we’ve lost with a smile, not a tear,” she said. “We miss and love all of you.”

She closed by saying that she believes her class is ready for anything that life throws at them.

Following her speech, DHS principal Leon Clark handed out awards to students who have gone above and beyond in their time at the school.

The Dr. James I. Bell Award, given to a female based on character and leadership, went to Jones.

The Tommy Brooker Award, given to a male based on character and leadership, went to Brock Montgomery.

The “I Dare You” Award, given to a male and female, was awarded to Aiken and Tucker Jones.

The Balfour Award, given to the most outstanding senior based on scholarship, achievement and loyalty, was also given to Alexis Jones.

In the valedictorian speech by Chance Martin, he also touched on the journey of the class from their time at Westside Elementary to DHS.

“We will never forget our most interesting teachers,” he said. “We feel that we are old and wise, but we still have so much ahead of us. We all want to achieve excellence.”

He advised his classmates to be individuals, not followers, and to have the courage to make difficult decisions. 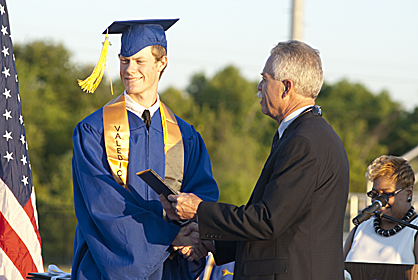 He closed with a running joke between Danny Wasson, a teacher at DHS, and the Class of 2013.

“What you lack in effort, you make up for in personality.”

As the students names were being called for them to walk across the stage and receive their diplomas, families and onlookers clapped and cheered with pride.

The presentation of a gift to the school was made by Cecilynn Anniecea Nicole Shields, the senior class vice president, and she presented the school with the proceeds of the senior fundraiser to buy more chairs for special events.

Twelve students graduated as honor students, and 28 students were members of the Beta Club.