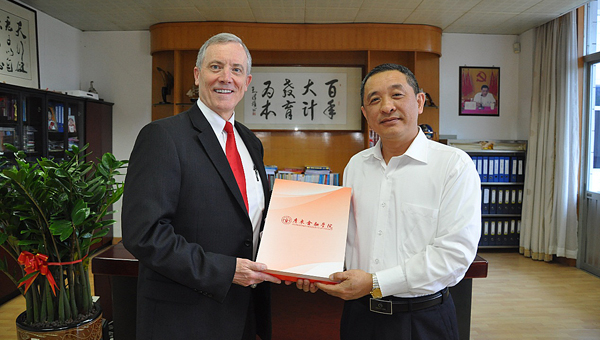 While in China, Dr. Ken Tucker (left), dean of UWA’s College of Business, met with President Liu of Guangdong University of Finance.

Guangdong University of Finance in Guangzhou, China kicked off its International Experts Lecture Series this March, choosing as the series’ first speaker Dr. Ken Tucker, dean of the University of West Alabama College of Business.

“It was an honor to be asked to speak at such a prestigious event,” Tucker said. The leadership presentation, he said, was “fun and highly interactive” and included group exercises in communication and character. The second presentation covered monetary standards, exchange rates, and global economic implications.

“The monetary standards presentation was actually developed by three of my finance and economics faculty, Dr. Joo Young Lee, Dr. Adam Cai, and Dr. Anna Cai, and I merely delivered their eagerly anticipated work,” he said.

GDUF serves some 22,000 students on two campuses in Guangdong, the province with the largest population and economy in China.

Since 2011, GDUF and UWA have enjoyed a thriving academic partnership. That year, the universities launched the 2+2 Dual-Degree program, through which GDUF students complete their freshman and sophomore years at Guangdong and their junior and senior years in the College of Business at UWA, earning degrees from both schools upon graduation. More than 85 Chinese students have studied at UWA since the program’s inception, and 40 graduated during UWA’s spring 2013 commencement.

On March 15, Tucker, Dr. Tim Edwards, dean of UWA’s College of Liberal Arts, and John Key, UWA’s director of international programs, met with GDUF representatives — including President Liu and officials from the College of International Education, the Office of Academic Affairs, and the Office of Foreign Affairs — to discuss the dual-degree program’s curriculum and future collaborative opportunities.

“Our 2+2 dual degree program has been very successful, due in large part to the strong relationship we have developed over the years with GDUF,” Tucker said. “The vast majority of our Chinese students major in finance and accounting and over 60 percent of our first graduating class have been accepted to major national and international graduate schools. Because of the mutually beneficial nature of the program, we see future expansion into other business majors as well.”

Tucker, who has served as dean of UWA’s business school since 2007, is president of the Alabama Communities of Excellence Organization and serves on the Board of Directors of the Alabama Council on Economic Education, the UWA Foundation, and the Marengo County Economic Development Authority. He recently completed his third term as a Marengo County Commissioner. He has won the William E. Gilbert Award for Excellence in Teaching and the Alabama Association for Higher Education in Business Award for Teaching Excellence and Professional Contributions, among others, and the College of Business recently received the Alabama Quality Award for Excellence in Education. Tucker regularly conducts workshops on leadership, communication, team building, and interpersonal effectiveness.