The back bedroom of a home on East Monroe Street caught fire Sunday at 8:15 p.m. No one was in the home at the time.

Demopolis Fire Chief Tommy Tate said there was a quick response by the department to help contain the fire. The department responded in less than five minutes, and contained the fire to the back bedroom of the house. The scene was cleared shortly after 9 p.m. 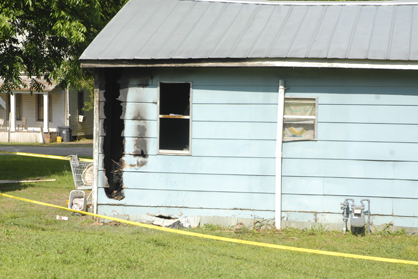 This home on East Lyon Street caught fire Sunday night, but firefighters were able to contain it in a back bedroom.

“Our downtown station responded very quickly to the fire and prevented it from spreading,” Tate said. “The one bedroom in the rear of the house was damaged pretty badly, but nobody was hurt. It was a good interior attack by our guys.”

The state fire marshals investigated the property Tuesday after being notified that arson was suspected.

“They came out (Tuesday) to investigate, and they’ve been conducting interviews to try to figure out what happened and who caused the fire,” Tate said.

On the scene were Demopolis Fire and Rescue and Demopolis Police Department.