Tremaine Richardson, 31, was arrested and charged on Monday, June 3 with assault in the first degree after he stabbed Phillip Shepherd in the back with a knife. 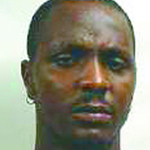 Demopolis Chief of Police Tommie Reese said that around 11:20 a.m., DPD received a call from E-911 to respond to the Fulton Street area near the old police department in regards to a person that had been stabbed.

Chief Reese said that when officers arrived they found Shepherd lying on the ground covered in blood. Shepherd was transported to Bryan Whitfield Memorial Hospital for treatment. He stated that Richardson had fled the scene and caught a ride to a relative’s home in Greene County.

DPD Officers went to this residence in the stream plant road area and arrested Richardson.