Demopolis 10U and 12U All-Star teams in action 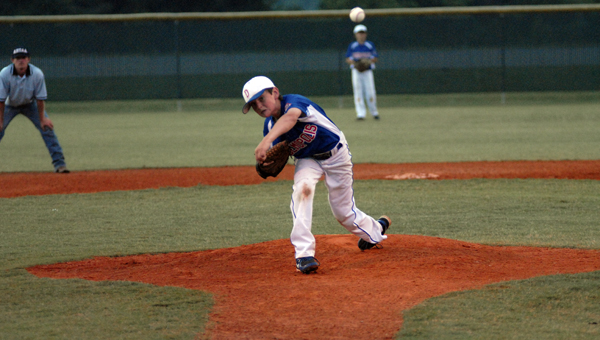 Andrew Fuqua pitches for the Demopolis 12U All-Stars in their game Friday night against Greensboro.

The 10U All-Stars of Demopolis hosted Greensboro Wednesday in a game that carried over to Friday because of rain.

Demopolis fell behind by a run in the top of the first, but they rebounded in the bottom half of the inning with two runs of their own. Cade Grace drove in Hayes Atkins on a fielder’s choice groundout and Cade Atchison scored on an error to give Demopolis a 2-1 lead. 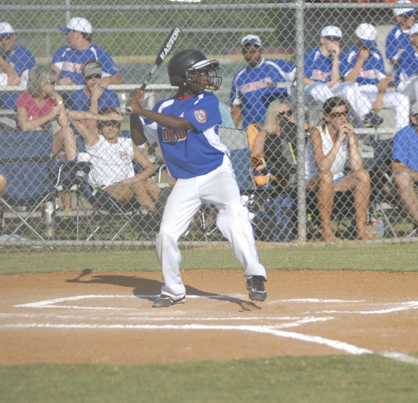 Tim Thurman bats for the Demopolis 10U All-Stars in their game Wednesday against Greensboro.

Greensboro was able to tie the game up in the second inning and take the lead in the third. Demopolis trailed 6-2 going into the fifth inning when the weather rolled in and stopped the game. The game was postponed in the bottom of the fifth and the two teams finished the game on Friday.

When the game restarted, Demopolis got their bats going early. Atkins drove in Tim Thurman and a double from Atchison scored Thurman to bring the score to 6-4 heading into the sixth and final inning.

Greensboro added one run in the top half of the inning led Demopolis 7-4. Peyton Stevenson singled and later scored on an error, but he was the only baserunner for Demopolis in the sixth.

Greensboro was able to come away with a 7-5 win.

The Demopolis 12U All-Stars hosted Sweet Water Friday night in the first game of a double header. They faced Greensboro in the second game to make up for the rainout on Wednesday.

Demopolis struck first in their first game against Sweet Water in the third inning. A groundout RBI by Henry Overmyer scored Andrew Fuqua for the first run of the game. Wesley Allgood then reached first base on a throwing error that also brought in Grant Patterson. A double by Trey Malone scored Allgood and a single from Hunter Thrash brought Malone across the plate.

Demopolis led Sweet Water 4-0 after three innings. Sweet Water got one run back in the fourth, and another in the fifth, but they were unable to overcome the deficit.

Demopolis defeated Sweet Water 4-2 to improve their standing heading into the weekend series.

Please check back later for results.