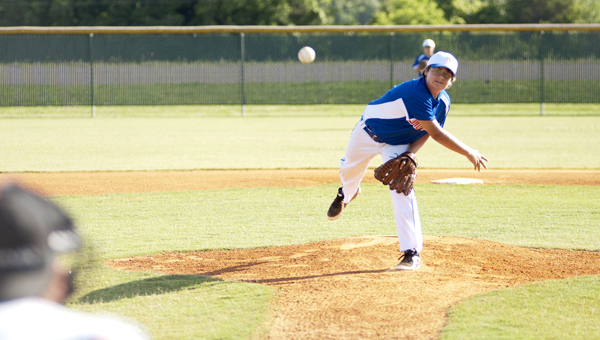 Hunter Thrash was the starting pitcher for the Demopolis 12U All-Stars in the first game of the District 10 championship series.

The Demopolis 12U All-Star baseball team hosted the Butler 12U All-Stars on Monday in the first two games of the District 10 championship series.

Demopolis’ bats were hot in game one and they jumped out to an early lead in the first inning.

Butler was able to get one run back in the top of the second, but Demopolis stretched the lead again in the bottom half of the inning.

Andrew Fuqua tripled to open the inning, but he was later thrown out at home attempting to score on a passed ball. Henry Overmyer reached on a fielder’s choice and Allgood drove a pitch out of the park for a two-run home run to give Demopolis a 6-1 lead. 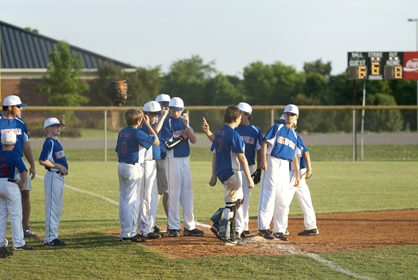 The Demopolis 12U All-Stars celebrate after they defeated Butler in the first game of the series 8-6.

Butler went three up, three down in the top of the third, thanks to an impressive double play by Thrash. Demopolis added two more runs on RBI singles by Fuqua and Collin McCrory to put Demopolis on top 8-1.

Butler did not go down quietly, though. They brought three across the plate in the top of the fourth to cut the lead to four, and they were able to silence the Demopolis bats through the rest of the game.

Down to their final three outs, Butler was able to string together some hits and eventually load the bases. Butler scored two runs to make things interesting, but Allgood was able to get out of the inning.

Demopolis won the game 8-6, which put them just one win away from the district championship.

In game two, both teams pitched well and held the other scoreless for a majority of the game. Fuqua pitched a complete game for Demopolis and struck out 11 batters, but the offense couldn’t get going at any point in the game.

Butler took game two 4-0, and the two teams will play Tuesday night in Butler at 5:30 p.m.